NY TIMES: ONE OF THE LARGEST GROUPS OF DEMONSTRATORS MR. BUSH HAS ENCOUNTERED SINCE SEPT. 11.

Both sides pretty much got what they were looking for Thursday, August 22, 2002, at the anti-Bush protests outside the downtown Portland Hilton.

In a narrow stretch of Taylor between Fifth and Sixth avenues hundreds of packed-in demonstrators shouted their disapproval of administration policies — everything from the looming attack on Iraq to corporate takeover of US politics — until unprovoked riot police were given orders to clear the street. They pepper sprayed and baton charged protestors back on their heels several hundred feet to the nearest intersection.

No life-threatening injuries were apparent but scores of protestors suffered inflamed eyes, nostrils and throats from the spray. And several protestors suffered leg wounds when they were shot at close range by police firing rubber bullets and beanbag rounds. Many injured received makeshift relief from bystanders using water bottles to flush out the irritants. Inside the Hilton President Bush carried on as guest of honor at a GOP $1,000 a plate fundraiser primarily to benefit incumbent Oregon Senator Gordon Smith in his campaign for re-election this fall.

The one-sided clash between riot police in black battle uniforms, full body padding, helmets and gas masks and the peaceful sign waving protestors lasted no more than a few minutes. First, a police official speaking through a nearly inaudible bullhorn warned the crowd (estimates ranged from 1,000-5,000) that an “emergency” had been declared. The melee began when one 30something woman standing at the police barricade was grabbed and ruffed up by several cops. She offered no resistance. The scuffle was ugly in its display of police aggression against an unarmed and unthreatening bystander.

The line of riot police then moved forcefully into the crowd, one officer letting loose with a torrent of pepper spray that washed over everyone in his path. Another officer literally threw himself into the crowd like a defensive lineman charging toward an unprotected quarterback. Individual protestors scrambled wildly to escape the burning spray whose residue wafted over the entire block. However, most of the crowd resolutely stood their ground and only gave way as the advancing police line reached their individual positions.

“We’re Paying Your Salary! Why Are You Doing This?!”

When the protestors had been forced back to the intersection, two squad cars with lights flashing drove straight into the crowd. The first one was immediately swarmed over by a handful of protestors with no other choice. They started slamming on the car hood and top forcing it to stop. Seeing their colleagues trapped by the crowd which had nowhere to go, police from the barricade line quickly moved in and fired beanbag rounds, rubber bullets and what sounded like concussion grenades that scattered the car bashers and freed up their motorized comrades pronto.

The intersection stayed jammed with protestors but they now backed away from face-to-face taunting with the frontline police. For the moment the demonstrators had had enough. Organized chants had all died away now except for individual rants. Most of the protestors were either tending to themselves or assisting others.

“Water! We Need Water Over Here!”

In addition to the prominence the local television and newspaper reports gave the protests, video of the police attacks made the intros to all three network morning programs the next day. The anti-Bush protestors succeeded in making public, however fleeting, their strong opposition to government policies.

Many national news organizationa also covered the protests including CNN, MSNBC and ABC News. Even The New York Times, in the final paragraph in the Aug. 23 article about Bush’s swing through Oregon, noted that the downtown protest “was one of the largest groups of demonstrators Mr. Bush has encountered since Sept. 11.”

And an Associated Press article headlined “Protests Took Presidential Staff by Surprise,” had White House spokesman Ari Fleischer admitting that Bush saw the protests from his limousine when he arrived at the hotel.

The government and police in turn had a quick victory in easily routing the street demonstrators who were in no mood, yet, for pitched street battles. However, protestors did return later that evening for more confrontations with downtown police. Bush was spending the night in Portland, and protestors were not about to go quietly.

Up Close…The whole incident was crazy. The cops just went off on the crowd with no provocation. Yes, we were yelling and screaming and generally protesting loudly. But we’re supposed to be able to do that here in Amerika still. Or so I thought.

I got right up on the frontline barricade. Figured that was the only place to be. And I’ll admit it got very scary for a few minutes right before they attacked. The regular police gave way to the robocops and you could see them preparing their advance. I started looking around me to the sides to plan an escape in case the shit really flew.

When the pepper spray started flying I was luckily on the other side of the line. The poor bastards across from me got it full in the face in some cases. Not a pretty sight.

When the police phalanx advanced, I shot up off the street into a recessed entrance for a parking garage. But the riot cops followed me and others and shoved us back into the fracas. I pushed right up into one riot goon who plowed me along pretty good. Thankfully the dude didn’t wail on me with his drawn baton or I could be Toothless Lars right now.

Then it got very crazy when the squad cars rammed the crowd. As I noted, a dozen or so guys started slamming the car, justifiably so I thought. A few riot cops then immediately waded into the crowd and started shooting. The newspaper says they actually used rubber bullets, in addition to the beanbag rounds. The smoke was really flying.

But just as quickly it was all over. The protestors did not regroup and charge the police lines. We had all been peacefully protesting and the crowd stayed true to form. Next time, who knows? The first Bush administration for good reason had called Portland “Little Beirut” because of its strident posture against that GOP government. Can’t see where much has changed.

I was proud of our side for not turning tails and running wildly away when the cops charged. It was more like an organized and orderly retreat. And I’m sure the cops felt good about their work. “Hey, boys, that was some good training there. And we protected the President.” Yeah, right.

It was all a ridiculous and unnecessarily dangerous situation caused by the police and secret service that could have gotten people seriously hurt or killed. I just wish I would have taken photos of the protestors and police during and after the attack, but I was too busy trying to cover my ass. 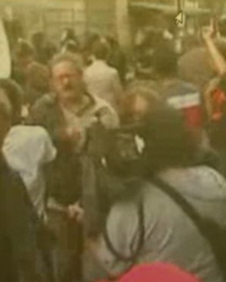