US Embassy Opens in Iran

On Anniversary of Hostage Drama, Former US Embassy in Iran Open to Anyone with $2.92.

Tehran — Saturday, November 4, marks the anniversary start of the 1979 Iranian student takeover at the US Embassy in Tehran when 52 American diplomats and support personnel were held hostage for 444 days.

Images of blindfolded Americans paraded by hundreds of Iranian youth swarming the embassy gates became seared into our collective national consciousness, with repercussions that forever changed the international landscape. And now, for the price of a few pomegranates, anyone walking the streets of this hyperactive metropolis can simply stroll into what was once an undisputed superpower headquarters reigning over much of the Middle East.

There is no visible police authority as you enter the clearly marked front gateway on bustling Taleghani Boulevard, only a friendly young man inside a sheltered ticket booth requesting 100,000 Rials, equal to about $2.92 at this week’s currency exchange rates.

I was handed a vividly in-your-face red ticket adorned in understated lowercase white English lettering announcing the “museum-garden of anti-arrogance” and “13 Aban” for the Persian calendar date corresponding to the November 4, 1979 takeover, as well as the Iranian Rial purchase price. All this is next to an unmistakably red Statue of Liberty upper torso encircled and slashed through with the universal “No” diagonal.

A short walk through a quiet green garden brings one to the main building doorway. The once plentiful anti-US posters and graffiti on the outside walls have been mostly removed and the fronting interior grounds are like a peaceful parkway oasis in the middle of a helter-skelter urban streetscape. 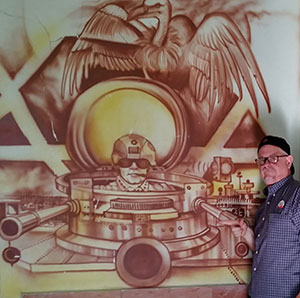 But just to the right of the walkway is a dramatic reminder of the stakes involved then and now. Atop a raised dais covered with a cheap wrinkled brick-pattern cover are what look like a helicopter rotor support and aircraft engine parts and other assorted metal pieces, the ruined remains of the failed US military rescue mission when a deadly collision happened in a desert staging area outside Tehran. Eight Americans died in the chaotic crash of their own doing, and they never got close to the embassy grounds.

The fiasco ensured there would be no further hostage rescue attempts by the American government, and likewise doomed then-President Jimmy Carter’s reelection campaign. Carter accepted responsibility for the rescue failure, and the American people in kind could no longer support him for a second term. I clearly recall the shocking and appalling breaking news on television at the time announcing the eviscerating disaster. It was just as important politically as the hostage taking itself.

Americans understand that things like hostage-taking happen overseas. However, had the vaunted American military done its job and completed its mission, or just reached the embassy and done something, anything, to get some of our people home, the public would have rallied to the administration’s side. Instead, at the time it was simply another in a long line of heartbreaking failures dating back to the Vietnam war.

The US president is in charge, and he or she takes full credit or blame in these operations. In that election cycle, nothing else mattered. Home interest rates, energy shortages, and tough taking former B-movie actors be damned. The reactionary Reagan administration that followed immeasurably altered the progressive trends then in place in much the same way the current hardline Trump regime has reversed course from the progressive currents supported by the previous Barack Obama White House.

Entering the imposing former embassy, one notices the added Iranian signage for the “13 Aban Museum” and a much larger and higher “The Great Aban 13th Exhibition”. Just above the smaller sign is an original embassy symbol most people miss, what is most likely the genuine great eagle seal of the United States Embassy itself. Its facing has been been stripped away and what looks like red graffiti spewed diagonally across the circle. The much larger Iranian sign appears to be topped by a crude copy of the great eagle seal with a white dove superimposed to the top right. Tall anti-American friezes that color match the adjoining front stonework also have been added to either side of the main door.

Once inside the former embassy, it’s immediately apparent the site is less what most would consider an actual professionally maintained museum and more a cross between an anti-American propaganda vehicle and an uncurated storehouse of cold war relics.

A wall of Farsi-language newspapers from the time commands the attention of visitors immediately inside the doorway. Though I don’t speak or read Farsi, it was still interesting to view the dated black and white photos and images.

Moving to the left, one becomes almost overwhelmed walking up a flight of stairs where the facing walls are covered floor to ceiling in anti-American murals. Interconnected images concerning the 9/11 attacks, the US invasion of Iraq, antisemitic oppression of Palestine, and religious iconography are more prominent than anything about the embassy takeover itself. The clearly chipped and gouged murals were in some places badly in need of repair, maintenance and updating, as is the building interior itself.

I was, in fact, more moved by the simple security-barred glass windows on the stairway that looked out to the front of the compound. These were the same windows where fellow Americans 38 years earlier had fearfully viewed the Iranian masses streaming over the front walls and forced a new world order no one could anticipate or predict.

Into the second floor hallway under a colorful lavender flowered “Welcome” sign, I was met by a menacing graphic poster right next to the water cooler of a monster headed Statue of Liberty in a lightening laced rainstorm. Hey, it was Halloween day, though I understand that’s not a well celebrated holiday in Iran. Nearby was a beautifully bordered wall sign asking visitors to Please follow us on Instagram at “museum13a” and another sign advising Telegram.me/aban13m . Between the slash mark and aban13m was an apparently incorrect @ sign that had been crossed out in red marker. Ah well, so much for revolutionary Persian efficiency.

Down the hallway was something identified as “The Glassy Room For Top Secret Negotiations.”  Inside the once secure room were three male mannequins seated at a conference table. The room is completed encircled in glass. All kinds of informative framed revolutionary texts and graphics hang on the cracked and often decrepit walls. One glassed display housed a number of paperback books with titles like Documents From The U.S. Espionage Den: The International Oil Industry Through 1980 compiled by the “Muslim Students Following the Line of the Imam”.

Another glass case with various black and white photos of the takeover was titled Humanity Supports with the explanation “From first days of conquering, people in little and great groups supported students behind embassy’s doors. These supports have grown by Imam’s lecture and confirmation of conquering Spying Nest. Later when Carter’s government took action for military threat, people came to embassy with shroud to show readiness for defense and supporting students.”

In addition to myself and an Iranian American, a handful of other tourists were on site including a male and female couple from the Netherlands, and individuals from Poland and Germany. Tour guides informed me that only a handful of Americans had visited the former embassy since it was opened to the public this January.

“There was a girl here from the US. She cried and said, ‘It’s completely normal to have these (espionage and listening) devices here. Every embassy should have it!’ We said, ‘Okay, don’t worry. Don’t cry. We will talk about it. Maybe we get to an understanding from each other. Maybe we don’t. That’s okay. Let’s talk,’ and after she leaves this place, she gives us the right, and she understood. Just see what happened. Just you say something, they are not going to believe it. But when they come and see by themselves, they believe it.” 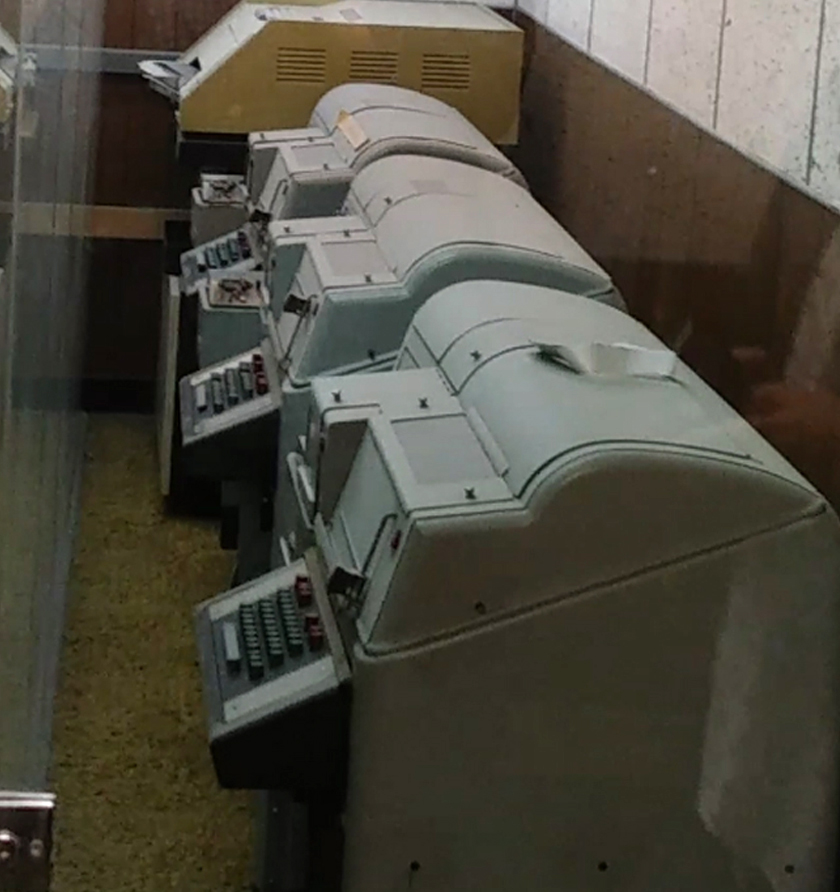 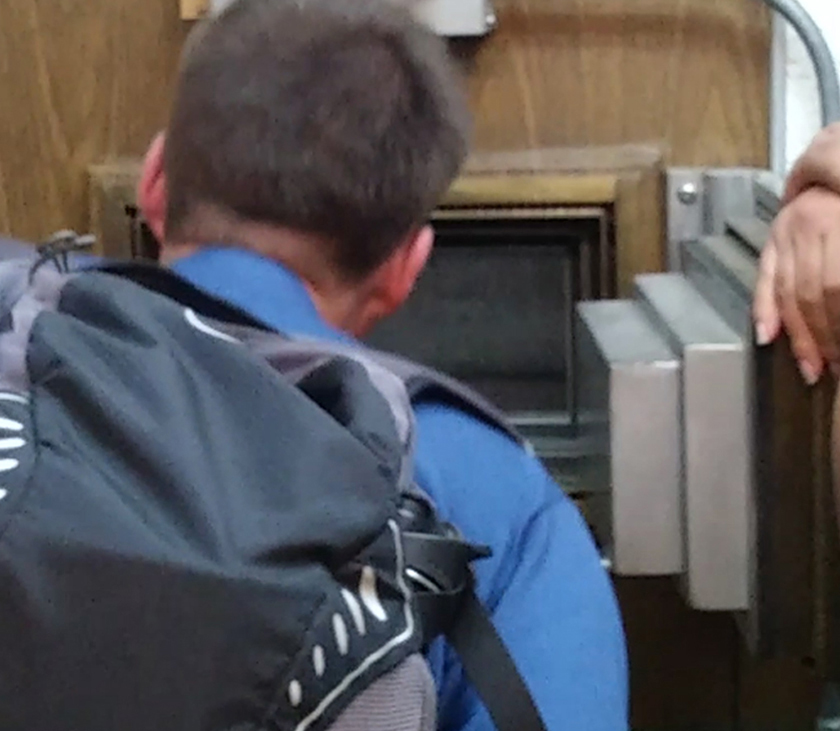 Tourist from the Netherlands inspects a vaulted feature in the “most classified room” of the former US Embassy in Iran where reportedly only two people had access. Photo credit: L. MAUSHARD

At another point in the tour, a number of us were directed to a room and asked to watch a 5-minute professionally produced video explaining the Iranian viewpoint on various international, though mainly US-focused, matters.  The video used a jarring reverse reality to question what we would think if Iran had helped engineer the overthrow of our freely elected government (referencing the 1953 CIA- and English-backed coup d’etat of Iranian Prime Minister Mohammad Mosaddegh), and if Iran had shot down an American civilian airliner killing all 290 aboard including 254 Americans and 66 children and then awarded a medal to the officer in charge (referencing the July 3, 1988 guided missile shoot down of Iranian Air Flight 655 by the USS Vincennes under the command of William C. Rogers III), among other incidents.

Afterwards we spoke with tour guide Mahdi Roshahani Fahro who discussed what he considered false narrative US media and entertainment accounts like the 2012 Ben Affleck-directed and starring movie Argo about the embassy hostage incident, which won Oscars for Best Picture, Best Adapted Screenplay, and Best Film Editing. The film was both critically acclaimed and widely derided for numerous historical inaccuracies.

“If a person wants to make a video about Iran, use the reality, if he is going to try and make a film about Iran. If not, he is just going to make a video to be, ah, rich, that’s on himself, on his shoulders. We are not going to make us thank him about that. Iranian people are happy people, okay? We do not lose any chance of being happy, okay? We smile to each other. That would be best, okay? And the time that we are watching Argo (smiling and moving hand to mouth like watching a Hollywood popcorn feature), we try to watch it like soccer football game. That’s a video.”

The guide was open to all questions and we freely engaged in a give and take. When I asked for his reply to the often heard alternative critique that the late Ayatollah Ruhollah Khomeini was in fact assisted and installed and supported by the United States after the Shah no longer served the West’s interests, and the current regime is still controlled by the US, he replied, “That would be a joke. Documents are available here. Those kinds of people that are telling that would be the sort of people that by watching a film can judge a country. Those people that are telling that, USA politicians helped Khomeini, okay, to take over the country, are judging that just by a sentence that they have heard.” 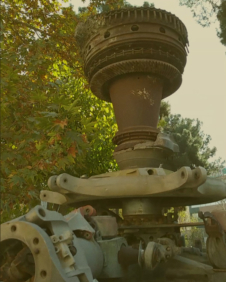 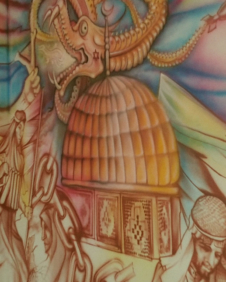 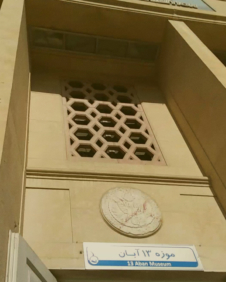