Welcome to the Occupation

I returned to Jerusalem’s Old City today by entering through the Damascus Gate and figured to just look around and at least find how to enter the Al-Aqsa Mosque grounds whenever non-Muslims are allowed in.

Before even reaching the Gate, I couldn’t help but notice the Israeli soldiers in a guard tower-like structure near the sidewalk and again grouped near the Gate entrance itself. Took some photos of the half-dozen or so heavily armed and uniformed troops before walking down into the mystical buzzing shops, doorways, eateries, residents and tourists that fill this section of the old city.

And a lot more Israeli soldiers and police.

I felt absolutely no tension or hostility among anyone in those narrow covered streets. Everyone simply ignored the soldiers and border police who more often than not were on their personal phones and talking among themselves, mostly 20somethings who obviously had no combat experience and not much discipline. Kids with guns. But they were a regular presence on the main thoroughfare.

A tour group of pilgrims numbering in the hundreds led by an Israeli soldier suddenly streamed out from a side street and bent down into the main avenue beside the Armenian church. Goodness knows why they needed the armed escort. The dutiful column was impressive in its numbers and time it took to clear the area. I suddenly realized I was beside the famed Austrian Hospice, the century-old guest house, originally for European Catholic pilgrims.

The hospice, more like a colonial grand hotel, is mentioned prominently by American journalist Vincent Sheean in his 1935 nonfiction book Personal History so I thought I’d give it a try. My $100 a night room at St. George’s Cathedral on Nablus Road was way too pricey for me, but they at least had a room available when four other places I’d walked to were booked full. Anyway, I was able to reserve a dorm accomodation in the Austrian Hospice for a week at $40 a night. I was very happy about that for now.

Jerusalem was cool and breezy, a godsend to this heat averse traveler. My physical state was holding up well, and I felt much more at ease now that my room and board were agreeably settled for the immediate future.

I continued my walk to the Western Wall plaza to get an idea where and how to enter the Al-Aqsa Mosque compound. Non-Muslims were not allowed on Friday and Saturday, and you had to line up early, about 5am apparently, in order to have a decent chance to access the grounds, I was told.

The plaza was teeming with thousands of Jewish faithful in celebration of the 70th anniversary of the founding of Israel. Thousands more were jammed up against the Western Wall itself while boisterous music thundered through the air. In the segregated female section, dozens of young women sang loudly in linked arms and danced in a huge circle of joyous celebration. Up on the plaza near me was an older man leading what appeared to be a tour group encircling him in a chorus of praise.

Not one uniformed soldier could be seen on the plaza or near the wailing wall. No one with a clearly displayed assault rifle. No one carrying any kind of visible weapon as a security presence in the midst of 10’s of thousands?! I’m sure the sight of heavily armed uniformed soldiers might have upset and intimidated the revelers, all dancing and massing in accompaniment with loud magnified music in celebration of the creation of the State of Israel directly beneath the gleaming golden domed Al-Aqsa Mosque, the holiest site in all Islam behind only Mecca and Medina.

I hung around the plaza for a time but eventually grew tired of all the Zionist clatter and headed back into the Old City alleys and byways. Back off the main street toward the Christian quarter, the rising street brought me past many shops of all descriptions.

I ended up talking for an extended period with a middle-age Palestinian man about politics and religion.

“I don’t usually talk about these things,” he admitted a bit surprised, I could see, shortly after we got into it. I have that affect on people sometimes. It’s a gift of mine.

“Well, I’m an atheist. Don’t much believe in any god. But I certainly respect your belief, and anyone else’s,” I explained.

“Hey, I was raised Roman Catholic, went to Catholic grade & high schools. Then I learned about the history of the Church, the most blood soaked institution on the face of the earth.

“Anyway, the world is so cruel now. So filled with the murder and torture of innocent children and women and seniors. I want no part of any god that controls these horrors. Freedom of choice? What choice did those defenseless people have?!”

My Palestinian friend urged me to believe in god, and I apologized for Trump and my country’s continued blind support of Israel and its ongoing atrocities like the ongoing massacres in Gaza.

All those soldiers again

Eventually we parted ways, and I ran into all those Israeli soldiers again. They all seemed to be college kids with very heavy weaponry. Many of them were constantly on their cell phones and joking around with each other. Hardly battle-hardened  disciplined soldiers defending the local security concerns or anything else, it was clear to any serious observer.

So I approached at least four different groups of them, usually 2, 3 or 4 together, and usually at least one female in each cell. Again, they all looked liked young kids casually sporting way too much firepower.

“Hey, man, what exactly are you guys really doing here?”

“We are fighting the terrorists,” one dude immediately responds.

“Really? What terrorists are there here in the Old City? I see and feel no tension. There’s no big problems here. What kind of violence has happened here recently?”

When no one could answer, I replied, “You obviously only need a simple police force here, with about 75 percent less troops than you guys have here now. In fact, your presence in these kinds and numbers actually causes whatever tensions and problems do exist. Your presence here is a huge part of the problem.”

One female gave me a very nasty sneer; I looked her in the eyes and called her on it. “What, you can’t talk? You think you’re doing something good here? Tell me. I wanna know.”

She couldn’t or wouldn’t say anything except “Have a nice day,” twice, as she grabbed her two companions and lead them away from me, the dangerous Lawrence of Arabia. Lordy. Again, these were in no way, shape or form some highly trained authorities standing their ground who understood how to deal with vocal opposition, much less the real thing. Just kids spouting propaganda cliques who had no idea whatsoever how to interact with someone determined to stand and look them in the eye and call out their occupation. Pretty pathetic, really.

The descriptions unprofessional and haphazard come to mind.

If something actually happened where you need a disciplined reasoned response in close quarters like Jerusalem’s Old City, I’d want want to be as far away as heavenly possible from these idiot kids with guns.

I did get one decent response from a female soldier who replied, “Yeah, maybe you’re right. But we can do nothing.”

“You can vote, right? Put pressure on Netanyahu and the government. You’re supposed to be a democratic country.”

After I finally left the Old City stoneways and went beyond the Damascus Gate, up to the main trafficked street, I reached the guard pavilion where 3 soldiers were stationed, again mostly talking among themselves and in no way acting like real military or police on a security detail. They must give out the Old City detail to the freshest least experienced newbies. If these folks are representative of Israeli military and border forces, they have very big and serious internal security personnel issues.

I will have you arrested

After only a few minutes when one of them realized I was no Western tourist fanboy, he screamed out “Go! Leave here!” while pointing down the street.

“I will have you arrested at the police station!”

“For what?! What are you gonna arrest me for?!”

“This is Israel! Leave now!”

“No, this is Palestine! It’s not Israel” I shot back immediately.

“That’s right. It is Palestine,” this tall professional looking guy right behind me shouted out in agreement. Man, I was so heartened. Finally some support.

The soldierboy kept up the screaming for me to leave, but one of his buddies chimed in and tried to calm him down.

“I’m no threat, and you can’t talk? Gonna take you away from your cell phone?” I asked, again holding up my arms palms out. “Man, so weak. Big guns. That’s all you got! That guy next to you seems like he’s smart. He can discuss. You? Wow!”

I had made my points, and nothing else was gonna happen. I just slowly turned and calmly walked off into the chill breezy Jerusalem night and bought a 10 shekel kaboob sandwich from a Palestinian vendor right across the street. [] 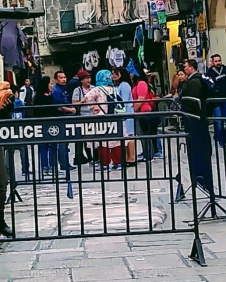 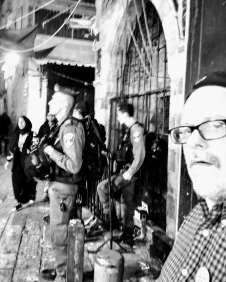