I want to make sure people know where I stand on issues.

I respect the quality of their products & large number of employees in the region. But I have a HUGE issue with Caterpillar Inc.’s enduring practice of selling bulldozers and other heavy equipment to apartheid Israel, which weaponizes them in deployments against innocent Palestinian homes, property and lives.

The problem is so bad that Caterpillar remains one of the top international targets of the BDS on Israel movement. Boycott, Divest and Sanction on the state of Israel because of the relentless Zionist campaign to take Palestinian land and expel as many Palestinians as possible from their own lands & properties, often by Israeli terrorism and internationally recognized war crimes.

The recent and ongoing mass murders by apartheid military snipers on defenseless & unarmed Great Return March demonstrators in blockaded Gaza is only the latest example of these fascist Zionist murders of innocent Palestinian children, women, seniors, handicapped and men.

Caterpillar has been willing to gladly take Israeli money — regularly bolstered by US financial aid — and provide D9 & D10 bulldozers which are then weaponized by the apartheid state.

Archbishop Desmond Tutu himself, an authority on apartheid states if there ever was one, called out Caterpillar by name this summer:

A Message to The Episcopal Church 79th General Convention from Archbishop Emeritus Desmond Tutu, Bonnie Anderson and Patti Browning on Justice in the Holy Land

I fully support the BDS on CAT campaign. I have written about the topic, and organized public protests against CAT’s policy of willingly, for decades, selling its equipment for apartheid Israeli military use on civilians.

The worldwide human rights community has long demanded a stop to CAT sales to apartheid Israel.

I genuinely want CAT to thrive, but never at the expense of human lives. We demand CAT to stop, at the very least drastically curtail, its sales to apartheid Israel.

Is the CAT blood money from apartheid Israel really worth it?

Once they understand the reality of the situation, I think the majority of working people here in Peoria & beyond will answer a clear No!

And please, let’s all remember that CAT HAS NEVER been a partner or friend of regular working people here in central Illinois.

CAT fought labor wars AGAINST its unionized labor force relentlessly during bitter conflicts in the 1980’s & ’90’s when it decided to once & for all neuter the local UAW union and hold an extremely hard line on pay and benefits in no way commenserate with the company’s skyrocketing revenues.

CAT has shown it cares little in regards to its workers in Peoria over the decades. That’s perfectly in line with caring nothing about Palestinian workers in their occupied homeland who have grievously suffered at the hand of apartheid Israel using CAT equipment for its crimes against humanity.

I’m not okay with that.

I was on the ground in occupied Palestine in April & May this year.

My four main articles about Palestine are the first four here:

My main Palestinian video is the first one here:

When I returned home, I wrote this Op-Ed piece for the Peoria Journal Star:

Then I organized a BDS on Caterpillar rally featuring speeches by the parents of the late Rachel Corrie, which was reported on local news:

My BDS interview with Mint Press: 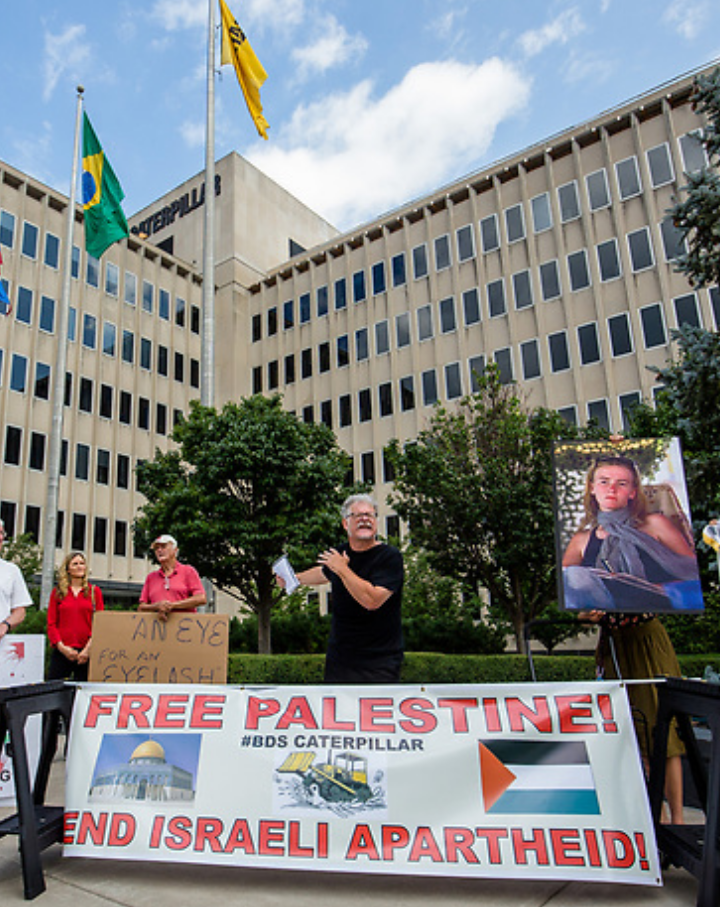