Lawrence J. Maushard a journalist and author who lived in Portland, Oregon for 17 years until 2017 before relocating back to Peoria, Illinois where he was born and raised. Read more of his work at Maushard.com.

My late wife Fay Maushard and I lived in Portland from 1999 until she passed in 2017 from heart failure and other complications from Scleroderma, a rare autoimmune disease. A proud feminist native of Iran, Fay lived a brave existence dealing with a too-often racist Portland which made it a daily battle just to interact with mainstream natives that would never let a naturalized Middle Eastern woman with an accent forget her otherness.

White women especially would weaponize the phrase “I don’t understand you!” with hateful vindictiveness. Nevertheless, we found some solace during our years there among wonderful neighbors in the Holgate-Foster neighborhood, along with the Scleroderma patient support, Persian diaspora, and international human rights communities. Fay truly loved everyone, and anyone who knew her felt the same.

So I don’t have any romanticized views of the Rose City, just a heightened understanding of its place in the world. Once you get past its history as a terrible hotbed of exclusionary racism against Chinese and Japanese immigrants, a northern outpost for the Ku Klux Klan, open segregation against its tiny black population, and enthusiastic support for its very own WWII concentration camp roundups and ethnic cleansing of the entire Japanese population in 1942, Portland somehow finally began to grow up.

Portland’s place as America’s greatest antifa city was confirmed long before the nationwide BLM rallies and marches scorched the national conscious in the wake of the May 25 police torture-murder of George Floyd in broad daylight on the streets of Minneapolis. Well before President Trump sent in terrifying anonymous federal agents that have snatched protesters off the streets into unmarked vehicles like Central American death squads coordinated by US forces in the 1980s.

Portland was a focal point of the early twentieth-century militant labor and free speech movement inspired by the legendary Wobblies, Industrial Workers of the World. That volatile working-class stridency gave us the likes of Portland journalist and activist author John Reed whose landmark book 10 Days That Shook The World was his first-hand account of the 1917 Bolshevik October Revolution in Russia that included a foreword by Lenin himself.

In the depths of the Depression, Portland dockworkers famously battled with police and Chamber of Commerce controlled thugs in 1934 for the right to unionize under the banner of the International Longshore & Warehouse Union. Mayhem, gunplay and several deaths occurred. It was “the most devastating work stoppage in Oregon’s history, which lasted 82 days, paralyzed commerce, and laid off 50,000 Oregonians,” wrote local historian Michael Munk.

In 1967 the Rose City was rocked by several days of violent black uprisings during the Albina Riots after a lifetime of white racist oppression in a state that included prohibitions for black property ownership and living in the Beaver State written into the state charter and not removed until the 1920s. At that time, the Ku Klux Klan held mainstream open memberships among the police force, utility companies, banking institutions and religious congregations. Portland’s mayor was assumed to be a member or sympathetic as well as state representatives, the leader of the state legislature, and the governor.

At the height of Vietnam War tensions in May 1970, city police shockingly attacked encamped and defenseless Portland State University students in the South Park Blocks with dozens of baton strikes to clear the area. Thousands marched on City Hall the next day with a list of demands with some injured student leaders still wearing bandages. That November, a huge dynamite bomb was detonated in the lower level of City Hall directly below council chambers about 3am Saturday Nov. 21. An estimated $1 million damage in today’s money was caused with windows blown out three blocks away. No one was injured in the massive blast, and no one has ever been arrested or credibly connected with the explosion.

Portland famously was dubbed “Little Beirut” in the late ’80s and early ’90s by members of the George H.W. Bush crowd based on hostile welcomings received by the elder Bush and his VP Dan Quayle. Things really got crazy when George W. Bush dropped into Portland on August 22, 2002 for a fundraiser at the downtown Hilton for US Senator Gordon Smith. I was one of several thousand peaceful protesters who resembled more a tree-hugging family-friendly anti-war street theatre performance group than any kind of threatening black bloc tangle of agitators labeled then by The New York Times as the largest anti-Bush demonstration since the 9/11 attacks.

I was right on the front barricades facing off against PPD robocops decked out in full militarized riot gear. While the rest of the country was still sucking up to W, Portland let out a primal scream against his obvious march to invade Iraq after landing troops in Afghanistan and itching for a whole lot more. We were loud and profane, but absolutely nonviolent.

Police attacked innocent peaceful women and children and seniors and others. Tear gas, pepper spray, baton strikes, rubber bullets, flash bangs and more were unnecessarily released on us, resulting in a number of injuries, some to children. I saw police horse collar and face punch a defenseless middle-age woman. I was hit by a baton swinging cop wildly lunging out at anyone in sight. I saw cops maniacally charge protesters like out-of-control linebackers setting up haymakers and sucker punches.

The one thing I did not witness was panic. Brave everyday Portlanders rather calmly backed up step by amazing step as the police continued to charge us, like a disciplined military retreat. Peaceful civilians are expected to cut and run and trample each other in the face of unprovoked physical assaults. For whatever reason, under fire, they did not. The inevitable follow-up court case described what occurred as a “police riot,” which eventually lost the city about $900,000 in settlements and court costs.

During the early years of the Iraq invasion and occupations, tens of thousands of Portlanders regularly turned out for overwhelmingly peaceful demonstrations, making the Rose City one of the leading international centers of the anti-war and anti-imperialist movements. San Francisco, London, New York, Barcelona, Chicago, Paris and Denver had nothing on Portland.

I don’t pretend to know the particulars about the current BLM, antifascist and anti-Trump demonstrations that have rocked downtown Portland for more than two months. I left the city a few years ago after my wife died because the pain was too much. But I do know that those protesting Portlanders are acting from the very best of intentions and forcing the powers that be to act like Americans and take civil liberties and civic responsibilities seriously.

Why is Portland like this, like something most of America used to be, or thought we were? I’m not quite sure, actually, but I think it has something to do with the observation that it is the only place I ever saw that takes Presidents’ Day seriously, like a major holiday. It’s difficult to explain but lots of people and businesses take the day off, like a weird local sign of respect, something both odd and quaint in today’s America.

My dear Fay certainly was correct when she told anyone she trusted, “Portland is really racist.” Like most of America, it is. But unlike most of us who seem to have forgotten how, Portland still acts collectively to stand up in the face of injustice like no one else. 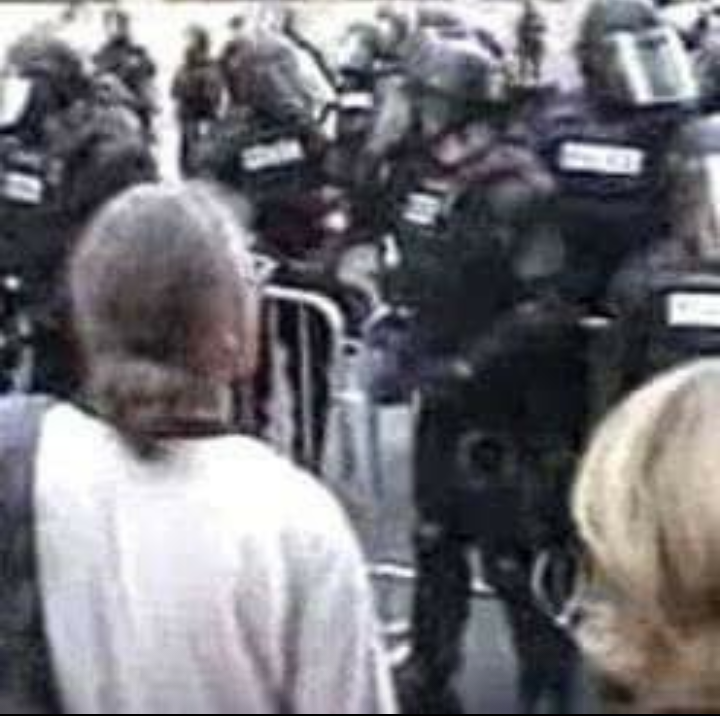 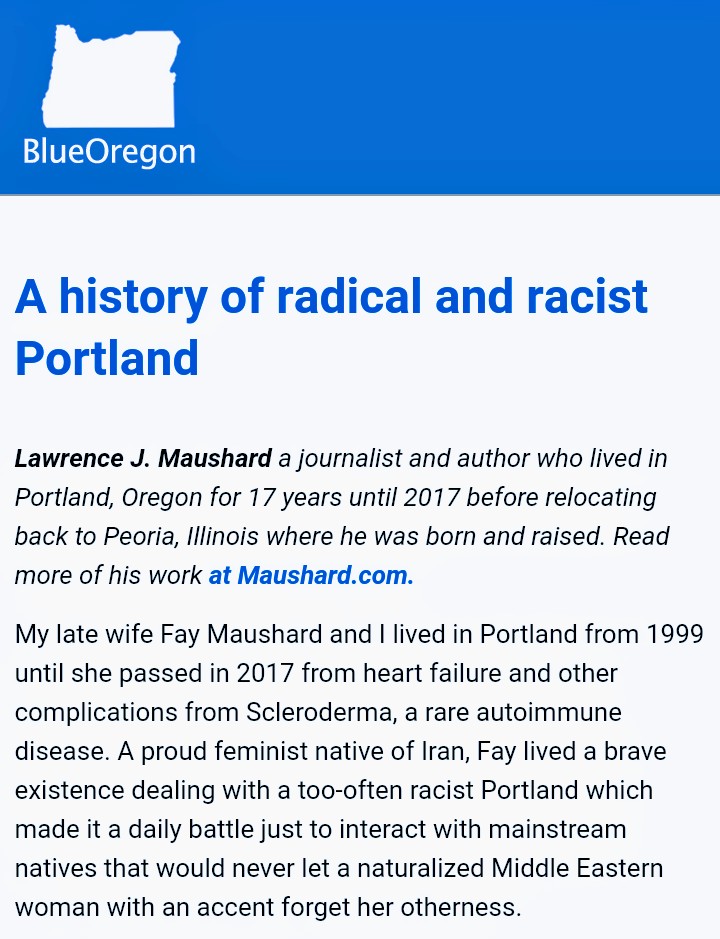 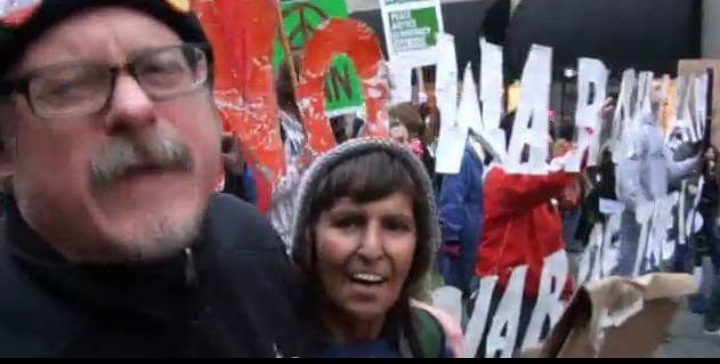