Watch out Boston, New England, America. While we’ve been looking elsewhere, it appears more and more newspapers, magazines and journals are grappling with the debate over legalizing illicit drugs. Once the subject was considered so taboo that no mainstream publication would touch it. Now, stories on legalization are cropping up everywhere from The Boston Globe to Time magazine.
The issue burst on the national scene last year in May when Time ran a cover story on drug legalization —“Thinking The Unthinkable”— and Newsweek published “Should Drugs Be legalized?” That same month saw Jet with a story on Baltimore Mayor Kurt Schmoke’s proposal for legalization.

Since then, increased numbers of mainstream, mass circulation magazines and newspapers have talked to experts, commissioned polls and debated the merits of repealing laws prohibiting the use of illegal narcotics.

Reasons for the recent turnaround in the press are arguable. However, the most visible side effect of the nation’s war on drugs—urban street violence and death involving the drug trade—appears to be the driving force behind the Fourth Estate’s growing attention span.

“I think you could argue it has nothing to do with crime issues— ‘They are higher on the national agenda because of medical issues’—and make a case for that,” Randolph Ryan, eight-year veteran editorial writer for The Boston Globe, offered in a recent interview with Quimby.

“But I think the reason everybody’s teeth are on edge about drugs now is that there’s obviously an issue of violent crime associated with the drug trade in a number of cities.”

Far and away the city that has received the most recent attention on this aspect of the problem is Washington, D.C. Drug related violence there has accounted for 300 deaths, giving it the highest per capita murder rate in the nation, and almost 50,000 arrests in the last two and a half years. Those numbers are a big reason Ryan penned “Another Route On Drugs” in his paper’s April 17, 1989 edition.

The editorial was in no way a call for legalization but was, in fact, a strong proposal for at least not ignoring anti-prohibition solutions to drugs. In the lead paragraph, Ryan wrote, “The main reaction (to the rising death toll) has been the call for tougher law enforcement. There is, however, a minority of strategists who believe it will be necessary to turn away from traditional strategies of prohibition and police work.”

During a fifty-minute interview at The Globe’s main office, Ryan had this to say when I commented that the striking aspect of the piece was not its content but the fact that it appeared at all.

“Well, I think there’s always (pause) a sense of care when you’re writing about an important public policy issue which is controversial and which the answers (pause) are not clear.

“Really, all the editorial said, though, was that all the options should be looked at. Right? Public policy options. My own sense is that the subject of decriminalization of some drugs—not all drugs—for a long time was not discussed at all.”

When asked if his piece was a first for The Globe in terms of addressing the legalization issue on the editorial page, Ryan again made the disclaimer—“(the content of the editorial) is a whole lot different from putting the paper on record in favor of decriminalization”—before his answer:

“To tell the truth, I don’t think in my memory we have ever said, ‘This is a really complicated question. There are a whole set of arguments that have been passed over in most of the public discussions about the drug war. And it’s time these arguments be taken seriously.’ I don’t think we’ve done that.”

What The Globe has done is join a rising chorus of publications that are taking the legalization debate very seriously. Since early last year the issue has been given space in Business Week, Maclean’s, The New Republic, Christianity Today, USA Today, and Glamour, to name a few.

Of course, the angles to this story are varied. Just as many organs decry legalization as there are those that simply promote investigation. In The New Republic, M. Kondracke wrote “Don’t Legalize Drugs” (June 27, 1988), while T.C. Muck wrote “Stoned Logic (Legalizing Drugs) in Christianity Today (Aug. 9, 1988). Other stories have appeared in a vein more or less represented by the likes of “Drug Wars: Legalization Gets A Hearing” in Science (Sept. 2, 1988) and “The Lesson of Prohibition” in USA Today (Dec. 1988).

Newspapers seem much less willing than magazines to take on legalization. That’s a big reason Ryan’s editorial is so startling. Those that have touched on legalization, and taken a stand, like the Chicago Tribune, more often than not oppose it. “This country already has enough misery from one mind-altering legal drug—alcohol,” editorial page editor Lois Willie wrote Quimby. One would assume the rest find it somewhat harder to be so definitive, take the safer course, and say nothing. Still, the nation’s newspaper, The New York Times, on April 25, 1989, published an editorial “Drugs and Edward Brecher.” It noted the late writer’s contribution to the drug health debate in his 1972 book Licit and Illicit Drugs. The editorial states, “He pierced the veil of moral righteousness and special pleading that still colors drug policy, offering sober prescriptions for limiting the damage that many Americans still don’t want to hear: ‘Drug-free treatment of heroin addiction almost never works. Nicotine can be as tough to beat as heroin. Good or bad, marijuana is here to stay.’”

The Times piece in no way addressed the legalization issue. Yet it touched on some of the facts concerning “heroin, caffeine, nicotine, alcohol, barbiturates, amphetamines, tranquilizers, cocaine, LSD, and marijuana,” facts that lead to ever more intelligent public discussion of the whole panorama of drugs, legal and otherwise.

Whatever the outcome of the debate, drug legalization is an issue sure to receive a growing hearing in the public domain. Ryan, for one, assured me he would continue to investigate legalization and write about it in the future. 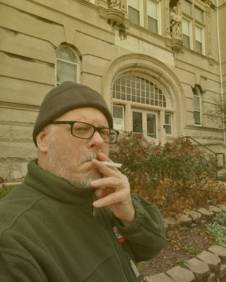 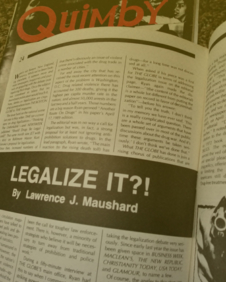