Requiem For a War

President Barack Hussein Obama has made good on the promise and commitment that got him elected: ending the war in Iraq. In a place like Portland, Oregon, that should mean something.

For years, there was an opportunity almost every weekend in the Rose City to participate in a public antiwar demonstration, often numbering in the 10s of thousands hosted by dozens of antiwar and social justice groups and churches.

And you could always count on the peace rally still held every Friday, rain or shine, at 5pm in Pioneer Courthouse Square hosted by the Portland Peaceful Response Coalition, often accompanied by the wistfully uptempo No War Drum Corps.

Actually, Portland was antiwar long before the invasion of Iraq began. On August 22, 2002, for example, months before the American attack the following spring, thousands of men, women, students, seniors and children peacefully and boisterously turned out in a Little Beirut-style welcome for then-President George W. Bush at a downtown Hilton fundraiser for former GOP Senator Gordon Smith.

For our troubles, Portland’s finest shot us with “non-lethal” ammo and flash-bang rounds, poured out relentless geysers of pepper spray in full-face assaults, applied headlocks to women, landed batons on defenseless protesters, and drove a patrol car into the retreating crowd trapped like rats on Taylor Street at Fifth Avenue. I was there, got hit and blasted, and saw it all.

Scenes from that chaotic police riot made every network morning news show the next day, and the American corporate media giant The New York Times accurately reported we were “one of the largest groups of demonstrators Mr. Bush has encountered since September 11.” Talk about being ahead of the war crimes’ protest curve. Hooray for our side, for sure, but the fight-club cops injured many people, nine of which filed suit and won substantial monetary awards.

A number of antiwar rallies followed, probably the next important gathering on March 19-20, 2003 when W – our American Tojo – finally pulled the trigger on his shock and awe blitzkrieg. Thousands poured into the downtown streets, while a number of demonstrators shockingly ran onto the I-5 freeway and staged spontaneous sit-downs in the middle of the busy night-time traffic lanes. An amazingly bold damn-the-consequences occupation if there ever was one.

A group of black bloc marchers famously knocked down a policeman who tried to prevent their march onto a highway on-ramp, and a McDonald’s window or two ended up sacrificial martyrs in a brief attack on American consumer capitalism.

Most demonstrators eventually settled into the SW Second Avenue approach at the Burnside Bridge. Thousands of unpermitted peaceful demonstrators successfully claimed that prime piece of downtown real estate and easily baited the riot clad police into shutting down the city’s main arterial waterspan during a long standoff. It ended only when the militarized gendarmes used flash bang grenades to stun and scatter the assembled masses into the predawn night.

As the war dragged on for years, much of the demonstrations failed to evoke the drama of those early confrontations, though occasionally a new radical twist would emerge. During a March 2007 protest, demonstrators infamously burned a life-size effigy of an American GI in the South Park Blocks. The YouTube video went viral to the apoplectic disgust of conservative pundits nationwide. Death threats were scattered throughout the video’s commentary section.

Irregardless of the specific incidents and events, countless numbers in the local peace community devoted their lives in so many different ways to ending the increasingly despised and detested US occupation of Iraq.

Looking, however, to our enduring deployments in S. Korea, Germany, Japan and many other nations, most antiwar activists and the nation in general genuinely, dejectedly assumed deep inside that we would never leave the storied, ancient lands surrounding the Tigris and Euphrates rivers.

So it genuinely pains me to see local antiwar and peace activists responding to the war’s end mostly with silence, contempt, disgust and indifference.

The Portland Peaceful Response Coalition’s web site has no recognition yet of the withdrawal. A bright red box at the top of the page screams “Will Democrats? Get the Hell Out of Iraq.” The site is currently focused on promoting a Dec. 9 draft resolution for the Portland City Council establishing a preference for redirecting national funding for Iraq and Afghanistan conflicts to domestic social needs. It includes the provision, “whereas the drawdown of troops should be done in a measured way that does not destabilize the region and that can accelerate the transfer of responsibility to regional authorities.”

A Dec. 15 post by Mark Den, a long-time presence on the left-leaning Portland IndyMedia web site, typically claims “obusha is disgusting. The nightmare for Iraq is NOT over. I do not want to ever again hear from anyone about why we should vote for republicans or democrats, two corporate parties of war crimes, just itching now for yet another war. Monsters!”

PDX Peace, a former area coalition “focused on the immediate goal of ending the war in Iraq and Afghanistan and bringing US troops home,” states on its web site that as of last February it is no longer meeting and recommends contacting a member group. It links to at least 35 other peace and justice sites, none of which acknowledges the troop pullout on their homepage.

Community radio station KBOO-FM, broadcasting in the People’s Republic of Portland since the height of the Vietnam war in 1968, had absolutely nothing about the war’s end on its web site, with no mention of the troop pullout in its blog or comment sections. Nothing. My how times have changed.

Of course, the invasion and occupation of Iraq to my thinking was a war crime. Pure and simple. Bush, Cheney, Rumsfeld, Rice, et al. are all war criminals who need to be sent to the dockets in The Hague as soon as possible. I believe that will happen. And it’s also a good bet to believe Obama will pull out US troops from the mess he inherited in Afghanistan by the middle of his second term. Call me an optimist.

President Obama didn’t say he’d make the war right, he didn’t say he could repair the damage or heal the wounds or somehow make it all worthwhile and justified. He simply said he’d end the war. And he did.

But that is apparently not good enough for many of my fellow left-of-center comrades. “Obama is a lying, murdering war criminal without an ounce of integrity who is arguably the worst pResident in US history,” according to a post by “J” on Portland IndyMedia.

I just wish these guys had better short-term memories. 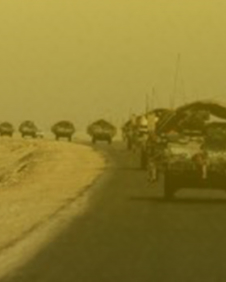 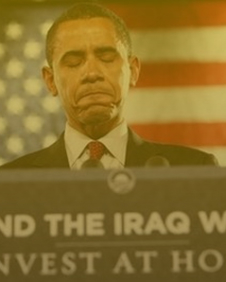