On Monday afternoon I came across two different Sikh truck drivers during my day-job as a security guard at a north Portland warehouse on Swan Island.

The two encounters afforded me the chance to offer my condolences and beg their forgiveness for the senseless evil committed on their co-religionists by a deranged white American male.

I felt a strong responsibility to display some semblance of humanity and humility in the wake of this massacre, taking place only hours after the Sunday morning gun murder of 6 Sikhs – Suveg Singh Khattra, 84; Prakash Singh, 39; Ranjit Singh, 49; Ms. Paramjit Kaur, 41; Sita Singh, 41; and temple president Satwant Singh Kaleka, 65 – in their place of worship near Milwaukee, Wisconsin allegedly by an American neo-nazi and military veteran.

As a white American male originally from neighboring Illinois, I know something about this type of demented personality. About someone who uses the n-word openly and frequently from a young age. Someone who publicly declares their racial and national supremacy. Someone with deep experience in weapons and ammunition.

Someone who continually blames his own insecurities and shortcomings, as well as the perceived shortcomings of his country, on others. Someone who displays fascist symbols, literature and paraphernalia more and more without fear of serious push back or rebuke.

“Are you Sikh?” I asked a young driver wearing the trademark turban as I handed back his paperwork. Sikh drivers are pretty common at our site, usually one or two a week during my 3:00 to 11pm shift. “I want to say how sorry I am about the killings. I’m just so ashamed, and don’t know what to say.”

“Yes, yes it is terrible,” he replied without much emotion or reaction. He asked me some work related information and calmly shut the cab door.

As I walked back to my post, a middle-age gentleman wearing a full beard and turban walked out of the shipper’s department and back toward his semi-truck in the searing summer sun. When I made the similar sympathies about the murders, he was more receptive.

“What happened to that policeman?”

“Yes, I think he’s alive. Doing better. Thankfully he was there. They got the killer.”

Asking about the injured police. Now that stood out. The first thing he said was to inquire about the condition of the cop. Amazing.

The driver’s name was Singh, and he lived in Yuba City, California with his wife and two children. The son was in his third year on a full scholarship in astrophysics at Berkeley. Mr. Singh showed no anger about the killings as we went on holding a thoroughly pleasant conversation about our families and more.

He believed a big part of the hate and racism here in America was due to right-wing media manipulation by the likes of Rush Limbaugh and Sean Hannity. I heartily agreed.

“You know, our Sikh temples are open 24 hours a day. We welcome all people of all faiths. All we ask is they do not smoke, be polite. They can share our food. We are open to all. In Yuba City we have 7 temples.”

It all reminded me about one of the white drivers I see regularly who more than once has used the derogatory slur “rag heads” with a grin when referring to the Sikh drivers he encounters. I always call him out. “Man, you can’t say that here. Stop it. Come on, you’re better than that.”

No one else ever says a word.

Later that night on the nationally syndicated “Ground Zero Radio” program with Clyde Lewis originating here in Portland, I heard Lewis ask a young man what he meant by “taking back our country.”

The gist of his reply included, “Well, you know, I wish it was back like in the Wild West and how they settled things.” He said this with a laugh. I immediately turned the channel not waiting for the response by Lewis.

Before he left my work site, Mr. Singh, a truck driver since the early 1990’s, told me about how he was verbally accosted one time by a white American simply after asking travel directions. “You foreigners cause all our problems. You take all our jobs!”

“I told him that I’m a citizen here, just like you,” Mr. Singh recalled as he tried to reason with the guy. Eventually, he was forced to push back. “The only thing I can’t do is be president, just like you. I can’t because I wasn’t born here. You can’t because you’re too dumb.”

We both laughed loud and hard. 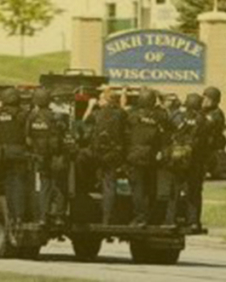 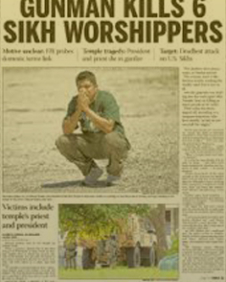