No, it wasn’t the rise of the disaffected white workers in the Midwest Iron Belt that put Donald Trump in the White House. Not by a long shot.

No, the driving force that kept Hillary Clinton from the presidency was the political sellout by a significant portion of the people who actually voted for Barack Obama four years ago, yet like the bigots, racists and misogynists they despise, and with nearly equivalent hatred, they absolutely refused to vote for Hillary Rodham Clinton, and handed the presidency to Donald J. Trump.

Put simply, if the same people who voted for Obama in 2012 – most critically those in Wisconsin, Michigan and Pennsylvania – had just voted for Hillary this time around, the Electoral College would have flipped and she would be the first female American president.

But that rather easy leap of faith – to elect the woman personally designated by President Obama to carry on and grow his legacy – was apparently a bridge way too far beyond the clipped political horizons of far too many supposedly adult former supporters of the current White House resident.

I call this group the holier-than-thou crowd. These are progressive and left-leaning individuals who have convinced themselves with an orthodoxy approaching that of the Trotskyite faction of the Marxist-Leninist glee club that Hillary Clinton is an imperialist demagogue worthy of a docket in The Hague. And certainly not their vote. They either voted third party, sat on their hands, or wrote in useless other names.

Now I don’t know many people who admit to voting for Trump. But I sure as shootin’ am acquainted with many folks who were absolutely against Hillary. The feelings of the holier-than-thou political death cult were perfectly summarized by people like Tim Flanagan, a Facebook friend who usually aligns with my Liberal viewpoint. But not this time. “Hillary is a war criminal who has killed millions. She belongs in jail,” Flanagan wrote (my emphasis). He is associate editor at The Portland Alliance, an online monthly progressive publication based in perhaps the Bluest capital of the Bluest state. Flanagan strongly backed Green Party candidate Dr. Jill Stein.

And a dear friend of mine Fred Faveluke, a union electrician, was a bit less demanding, though still anti-Hillary: “I can’t fault anyone for voting for Clinton. But I cannot vote for her. Mostly it’s about her pro-war attitudes. Also she lacks moral character. And let’s not get into NAFTA, TPP or the individual mandate in Obamacare,” he posted on Facebook just hours before displaying a photo of his Beaver State ballot with a presidential write-in for Spongebob Squarepants. I kid you not.

About a month ago, I ran into a vendor selling copies of Street Roots, a weekly Portland newspaper devoted to issues of homelessness and poverty. In addition to his newspapers neatly arrayed semicircle on the sidewalk were cute portable speakers blaring out campaign speeches by Dr. Stein. This guy was into politics. He was convinced that Hillary had stolen the primaries from Bernie Sanders, and with equal measure immediately denounced Sanders as a sellout capitalist fraud. All this when I asked, “If the electoral theft is true, why did Bernie himself not broadcast this so-called fact?” As we got more and more into the discussion, he got louder and louder and quickly flamed out by dropping an f-bomb on me. So much for rational intelligent discussion.

Ricardo Varela, the education outreach coordinator at Oregon DreamActivist, an undocumented-led organization devoted to securing rights for that community, was a steadfast Dr. Stein supporter who regularly reposted on Facebook colorful graphics against both Trump and Hillary claiming a vote for either candidate was “wasted.” One of his reposted graphics read, “Who’s Worse? warmonger, pay to play, lying/secrets, shaming Bill’s victims, and money didn’t go to charities” credited to Hillary, while listing other choice descriptors for Trump. Ricardo rarely if ever added his own commentary to these graphic screeds, just reposting images he found elsewhere.

“The corruption surrounding the Clintons is frightening,” wrote Joe Neubarth of San Diego, a Facebook friend, author, and climate change awareness activist who has consistently denounced Republicans and many of the establishment Democrats as immoral greedheads. “It is even more frightening than the corruption surrounding Trump, who is just a horribly corrupt businessman and a philanderer like Bill Clinton. . . . So, I am stuck with writing my own name in, or voting for Jill, or writing in Bernie Sanders. The corruption associated with Hillary is too Satanically Evil (emphasis added).”

Joe penned afterwards that he wrote-in the name of a female family member for president. How charming.

Obviously, holier-than-thous in states like Oregon and California meant nothing to the election. But where they did specifically tip the race included Wisconsin, Michigan and Pennsylvania. Four years ago, Obama won Wisconsin with 1,620,985 votes. That number would have been fine for Clinton this year because Trump won the Cheese Head State with only 1,409,282. Clinton lost by only 27,300. At least that many Lefties on the combined campuses of the University of Wisconsin refused to vote Clinton, probably in Madison alone. Dr. Stein won 30,980 votes.

The 2012 Obama take in the Wolverine State was 2,564,569, which would have easily won this year when Trump earned only 2,279,210 votes and Hillary lost by just 11,837. Again, the campuses at Ann Arbor and East Lansing alone had that many potential Hillary voters who decided they were too cool and morally pure to cast their lot with the tarnished Democrats. Dr. Stein won 50,700 protest votes.

In the Land of the Iggles and Steelers, Obama’s 2012 vote of 2,990,274 would easily have bested Trump’s tally of 2,912,941. Hillary lost by 68,236 votes in a state where Libertarian Gary Johnson won 142,653 and Jill Stein took home 48,912. The combined major college enrollments total more than 300,000 students in Pennsylvania. You can’t tell me that a huge portion of that pool of voters didn’t drink the hard-Left anti-Hillary group think Kool-aid and refuse to support the Democratic candidate.

Tim, Fred, Ricardo, and Joe are all great people that I would trust with my life. But they, like millions of others in the holier-than-thou crowd couldn’t get off their moralistic high horse and vote the practical real-world choice that would have given the country the best chance to implement a true progressive worker-friendly government built on the successes of the Obama administration.

In 2016, the number of deplorable Trumpsters didn’t so much spike (who won the popular vote again?) as the people who knew better abdicated their civic responsibility in droves for the sake of some personalized holier-than-thou vanity pedestals. I hope they thoroughly enjoy their new found moral minority grandstand views through the growing carbonized haze as everything around them burns. [] 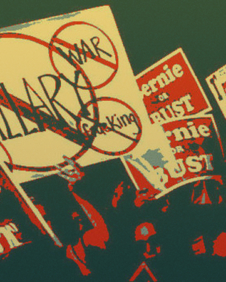 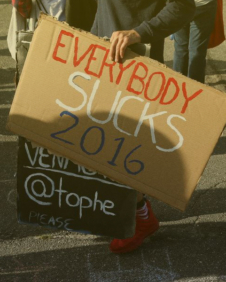 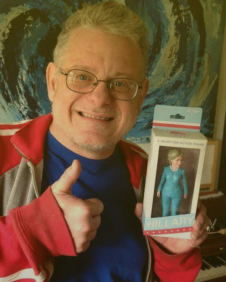