Ibrahim for food, not bombs

In the Palestinian sector on the famed Mount of Olives, the downside of the hilltop mosque on Salman Al-Farsi Street near the Mount of Olives School and the Mount of Olives Women’s Center, the internationally known advocate for peace Ibrahim Ahmad Abu El-Hawa maintains a slightly rundown open center welcoming all travelers with no regard for money or background in the nondescript down-on-its-heels A-Tur neighborhood.

The entryway steps leading to the 76-year-old Palestinian’s multilevel building from an always open substreet-level doorgate are littered with a fidgety cadre of sickly flea-bitten cats, like much of the other hardscrabble, garbage-strewn narrow avenues and alleys in occupied East Jerusalem. Everyone is welcome to stay at No. 31 as long as they wish, and resident travelers never have to worry about food and drink. Abu El-Hawa makes sure they have sustenance and shelter.

“My parents who teach me. To love everyone. Because let’s say we are all one seed, the seed of Adam and Eve,” explained the diminutive 5’2” widely respected balding senior who had just walked in trailing two young men visiting from Switzerland. “And we are all born of this holy mother, the earth we came from. No one have a sign here (pointing to his forehead) to say Muslim, Christian, Jew, Buddha, Buddhist. We are all one.”

His detailed profile and relentless efforts for peace in Palestine and worldwide have been featured in Change.org, Mondoweiss, Haaretz, Le Monde, The Huffington Post, De Welt, Daily Kos, The Jerusalem Post, The Israeli Committee Against Home Demolitions (ICAHD), and numerous other media outlets in the Netherlands, Poland, and Russia, among others.

But I came across Abu El-Hawa the old fashioned way as he flagged down pedestrian travelers at a crowded sidewalk cafe table in a grimy busy commercial strip of restaurants, juice bars, meat vendors, tourist hostels, veggie stands, and convenience shops across the street from the Old City’s Damascus Gate.

“Welcome! Welcome!” he gently admonished almost everyone in a simple attempt to sit and talk with strangers for a few brief moments.

“I love to talk to different people,” the red keffiyeh-coiffed gentleman remarked. “I used to sit in the subway station at night on 42nd Street when I visit in New York and do the same.”

His passionate desire for continuing communication and a deep-seated understanding of the human condition drives Abu El-Hawa’s mission for peace and social justice.

So when I asked about his take on the Palestinian-Israeli conflict, and the upcoming highly contentious move by the United States to transfer its official embassy from Tel Aviv to Jerusalem on May 14 in contravention of decades of international law and understandings, he offered an opinion not often heard within the peace community:

“Maybe Mr. Trump have the key. I feel in him as a strong man, and he keep the word. They talk about moving the US Embassy to Jerusalem back in 2007,10 years ago, but nothing happen. Obama, he can’t face it; they are busy with something else.

“This guy Trump, he face it. He face it to do it. And maybe he’s so strong, he can bring something (helpful) between Israeli & Palestinian.

Who will stop them?

“First, who will stop them? is the question. If they decided 10 years ago, why they don’t do it before? But Trump is strong and don’t break the word. Maybe he will bring something better. He will also visit Ramallah with (Palestine President) Abbas, too. Maybe something, by God’s way, they decide it.

“Most important thing for me is to (heal) the hearts of the mothers. It’s enough. Enough people get killed, enough broken the heart of the mothers, and we hope someone can understand what I’m saying. To deal with it.”

Continuing into his macro take on the heart of the local and wider endemic and intractable conflicts, Abu El-Hawa added,

“These other countries control all the Middle East, and the world never bring any goodness. We need to have that peace. We supporting, always support, the highest business people, all their guns & machines. They don’t care about the heart of the mother, and the children.

“We ask God, in this minute, to bring the right thing for this land. And for all the lands because all the mothers, the heart of all the mothers — Christian, Jewish, Buddha — all are broken.

“Release all the prisoners! Bring the love to this land, to the Holy Land, and all the land of the world! Because there is no black and white and red. They are all . . . We need help to them.”

I don’t trust any government.

Though he tries to put a positive spin on the coming embassy move, it’s not like Abu El-Hawa has a lot of confidence in the regimes in Washington and Tel Aviv and Ramallah:

“Only way, and only one way. Don’t leave anyone hungry, or missing or needy. Why the thief going to break into the home? Because he don’t have enough. He don’t have food. All that money, trillions of dollars. If they feed the poor, they never break the door. We have other problems, but not when you have need.

“With life we have now, look at every country, especially in Middle East, with all those prisoners. Some people fight for brother or father. I pray and ask God to touch the heart of leaders in the world and release the prisoners who are in prison for nothing. And that is the only way we can bring some conflict down. And I hope I will go and meet with Mr. Trump. Maybe I will find a way to go to the White House.”

That wish is no wild pipe dream.

“I been in Ramallah, the first time when Mr. Trump sit in his chair in the White House,” claimed Abu El-Hawa. “They gave me one minute to talk to him from stage on video. I say ‘Mr. Trump please!’, you know, when he come to sit there, what he want to do first?, to build a wall between him & Mexico. It is not up to my people to want to destroy that wall tonight. But I told him, ‘Mr. Trump, please don’t try to build a wall between you and your neighbor. May peace prevail on earth. Thank you so much, God bless you, goodbye!’  250 million people listen to my voice in that one minute. Really amazing. God say you have to love your neighbors as your brother, as yourself.”

As a member of many peace-oriented groups in Palestine, Israel and internationally, Abu El-Hawa noted that “Years ago, I been in demonstration against the war in Iraq. I carry sign on my body. I been at the United Nations home, and I send a message to Mr. Dick Cheney. I told him, ‘Please stop shipping your boys and materials at us! Thank you.’

“Two years ago, I been at funeral of Muhammad Ali in Kentucky. I called them, they told me, ‘Welcome!’ I saw Ali when he was here in Jerusalem. I called his daughters, and I met his brother in Kentucky. I been with 14,000 people & leaders of Turkey and King of Jordan when Ali die.

“Last year, I been in London, New York, Chicago, Texas, New Orleans, Los Angeles, San Francisco for Abrahamic reunion speaking. I spoke in synagogue in White Plains, New York. I been speaking in western mosque, church and synagogue. I been in Utah with 14,000 people talking about peace.

“So maybe I get to White House and see Trump.”

Jerusalem’s advocate for peace — who has comforted the family of hospitalized Israeli settlers, and accompanied the sick to their far off homelands — plans to travel to Brazil after the upcoming month of ramadan with British filmmaker John Tate who is creating a documentary on his life. Then he will visit England and the United States. The reason behind the trip to Brazil is a special ceremony in September to officially recognize Abu El-Hawa’s new position as an honorary citizen of Brasilia, capital of the largest South American nation.

According to a document from Haverimbril, a Christian Israel-Brazil friendship group, dated April 20, it reads, in part, “It is with great joy and pleasure that we are directing the official diary of the Brazilian Parliament, Federal District, which includes the publication of the legislative decree that grants the great honor of the important title of Honorary Citizen of Brasilia, his person, capital of Brazil . . . for the good work done in favor of peace especially between Brothers, Arabs and Jews. Also for his support to the projects of cultural exchange between Brazil and Israel for the everlasting since 2006.”

Though always ready with a joke and an easy laugh and smile, there is a sense that Abu El-Hawa’s scheduled trip abroad this year might be one of his last.

Health is not good

“I don’t think I will live long because I have a lot of attention on my shoulders, and this takes all my energy. I don’t sleep enough in my bed. I just came now from the doctor. My health is not good, they need to change many parts in my body.” Major problems include kidney and diabetes issues to the point where, he said, “Doctor tells me to don’t fast” during the upcoming Islamic month of ramadan.

So he doesn’t pull his punches when asked specifically what can be done to help solve the current Palestinian-Israeli conflict, turning it back to economics:

“I thought they make the Palestinian somewhere for income. As we are, someone makes a business income from all that what goes on here. There is a lot of money, especially for us, coming to Jerusalem. We stand strong on the summit rock in Jerusalem and don’t move, but we don’t see it or smell it. All the money what coming over. Where is it?! There’s no control. There’s no control. I blame the people in (Palestine Authority) Jerusalem. They don’t share. What the supporter for people in Jerusalem? All the money that’s coming into Jerusalem. None of us have to work. There’s enough money. But we don’t see it. We don’t smell it.”

And coming from a largely conservative Bedouin culture and family reportedly dating back more than 1,400 years in the region, Abu El-Hawa believes any solution rests with the female side of the social equation: “I think, the only way . . . I thought til today, most of the leaders of the world, they are not the father of the nation. That for the nation, for us everywhere, to need the mother. The mother cares about her children. More than the father. As written in our Holy Book (reciting a brief passage in Arabic), Heaven under the foot of the mother. Because the mother always want to protect us, and hold us between her arms. Palestine has not found her mother, no. Because the mother will never never send her children to the war to get killed and wounded. Mother always try to protect her children.

“We don’t need much here. We can live on love & peace,” intoned the aging peace advocate with a slight air of resignation. “Mother’s heart is broken because what went on today, every day. Not just here. Around the world everyday, in Iraq, in Pakistan, in Phillipino. Everywhere!” []

A retired auto and truck mechanic with no formal education, Ibrahim Ahmad Abu El-Hawa took early retirement 17 years ago. Mounting legal difficulties regarding Israeli permits for additions to his house of peace on the Mount of Olives have imposed continuing large monetary fines, including the threat of personal jail time.

Donations to support his open center facility and his peace advocacy can best be made through Western Union to his name in Jerusalem, Israel. Email a note that includes the receiver’s amount and receipt number to maryhawalyn@alqudsnet.com. Find him on Facebook at Peace for Ibrahim and http://peaceforibrahim.weebly.com and +972547768777.

Ibrahim Ahmad Abu El-Hawa hosting travelers just arrived from Switzerland at his open house for peace in the A-Tur district on the Mount of Olives in occupied East Jerusalem. (L. Maushard photos) 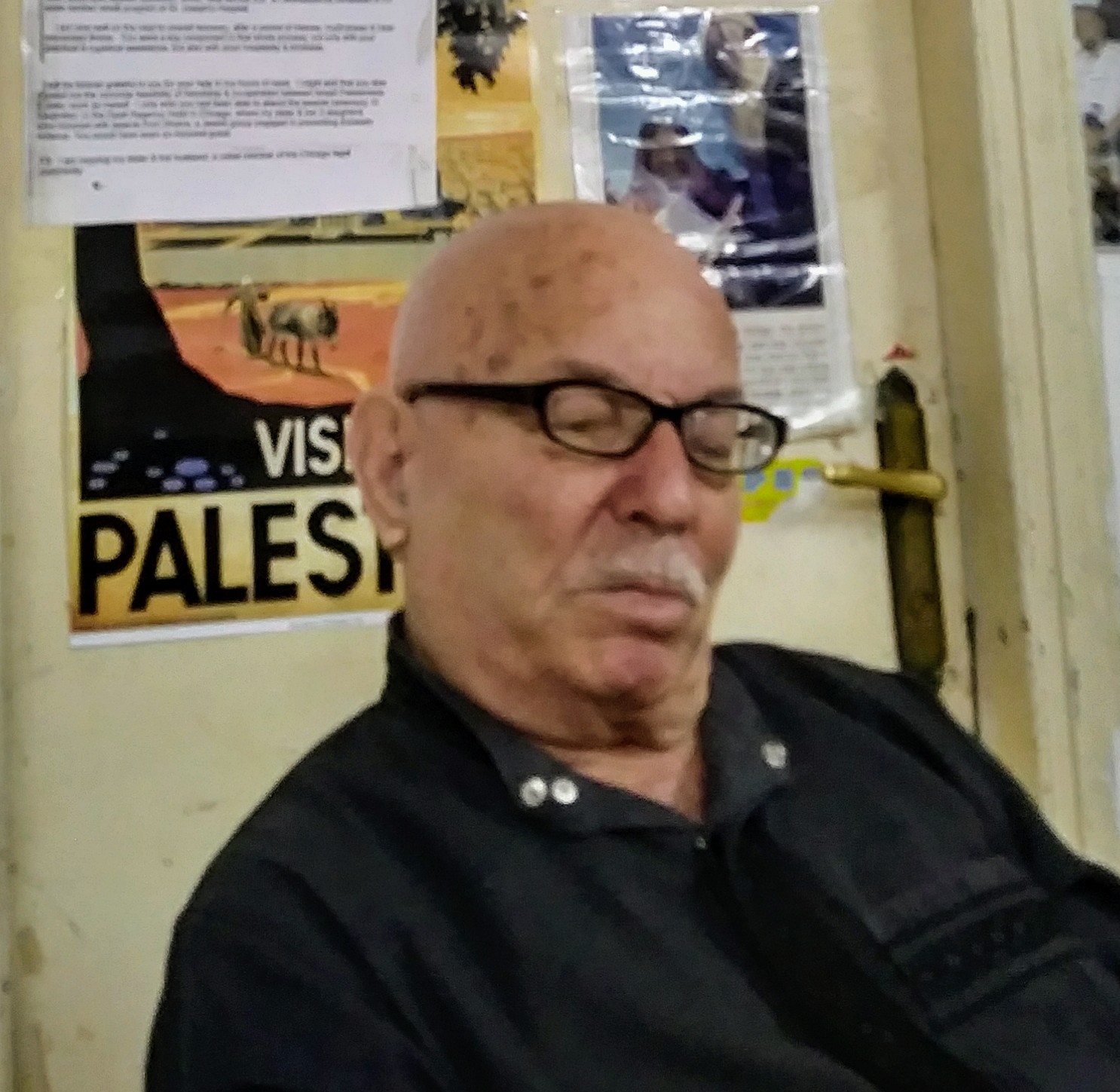