In the morning edition on April 5, a small article 16 Negroes Arrested In Main Street March began “Chanting ‘We are the black men’ 16 Negroes were arrested as they paraded down the middle of Main Street at approximately 11:30 last night in protest over the killing of Dr. Martin Luther King.”
After listing the names, ages and addresses of those arrested, and other details, the article continued, “Officers Don Story and Roy Bright reported they got out of their squad cars and walked along with the group, which grew to approximately 10 persons within a short distance. The marchers were walking shoulder to shoulder, and for a few minutes were holding up both lanes of traffic near (Bradley) University.
“When the group reached the intersection of Main and University streets they were being accompanied by several other Negro men who were walking on the sidewalk. At the intersection, the police department’s patrol wagon met them and the marchers were informed that they were being placed under arrest for disorderly conduct and those under 21 were also being charged with curfew violation.
“Officers reported that one of the men who got into the patrol wagon, stood up and yelled, ‘If you’re black, get in.’
“According to officers, several Negroes on the sidewalk then got into the wagon and were taken to police headquarters.
“As the prisoners, many of them Bradley students, were being booked there was no disorder and none of those arrested offered any resistance.”
The evening edition that night also included the following two paragraphs not included previously,
“A number of marchers and the two police officers narrowly escaped injury when one motorist accelerated instead of slowing when he neared the column.
“(Officers) Bright and Story said they and the marchers all leaped clear of the speeding auto, but failed to get an accurate description of it in the confusion of the moment.”
Only in Peoria.
On Saturday, April 6, more than 200 uniformed and well-armed Peoria-based Illinois National Guardsmen left from the North Adams Street Armory and arrived that night in Chicago where major disturbances were ongoing. Peoria Journal Star reported two days later that “Approximately 240 Peoria area National Guardsmen have been on duty in Chicago patroling the streets since their arrival Saturday night.
“Companies A and B of the 1st Battalion 123rd mechanized Infantry are in jeeps and armored personnel carriers (APC’s) in the Kinley Park area on the near-west side of Chicago,” according to news reports.
The following day, the Journal Star reported, “70 area stores canceled Sunday business hours in response to the President’s declaration of a day of mourning for slain Negro leader Dr. Martin Luther King. Store owners have not closed their doors (in Peoria) on a Sunday since November 25, 1963 — the Sunday that followed the assassination of President John F. Kennedy at Dallas, Tex.” Most of those stores and others remained closed until 10:30 Monday morning, after Dr. King’s funeral in Atlanta.
At 2pm on Sunday, April 8, more than 2,000 people marched silently in a 3-block long mourning procession led by Rev. Calvin Hightower, pastor of Morning Star Baptist Church, Rev. Charles Sensel of Bradley Avenue Evangelical United Brethren Church, and Peoria Mayor and Mrs. Robert H. Lehnhusen from the Peoria County Courthouse to First Methodist Church where “the crowd filled all pews and overflowed into the aisles. The huge church seats 2,000,” noted the newspaper.
Monday, April 9, “John Gwynn, president of the local NAACP branch, said letters were being sent today to the three public bodies (Peoria City Council, School Board and Park Board) asking them to take meaningful civil rights actions:
‘I appreciate the memorial services. I go along with the mourning. But I believe (Dr. King) would be more satisfied to know that the Peoria City Council had reconsidered its restrictions on the housing ordinance.
‘Rather than excusing children from school to attend services, Gwynn said, ‘It would be more of a tribute if you ended de facto segregation in the schools.’ “
Sporadic rioting did occur in Peoria in the aftermath of King’s death, some of which is referenced in the Peoria Journal Star photos accompanying this post.[] 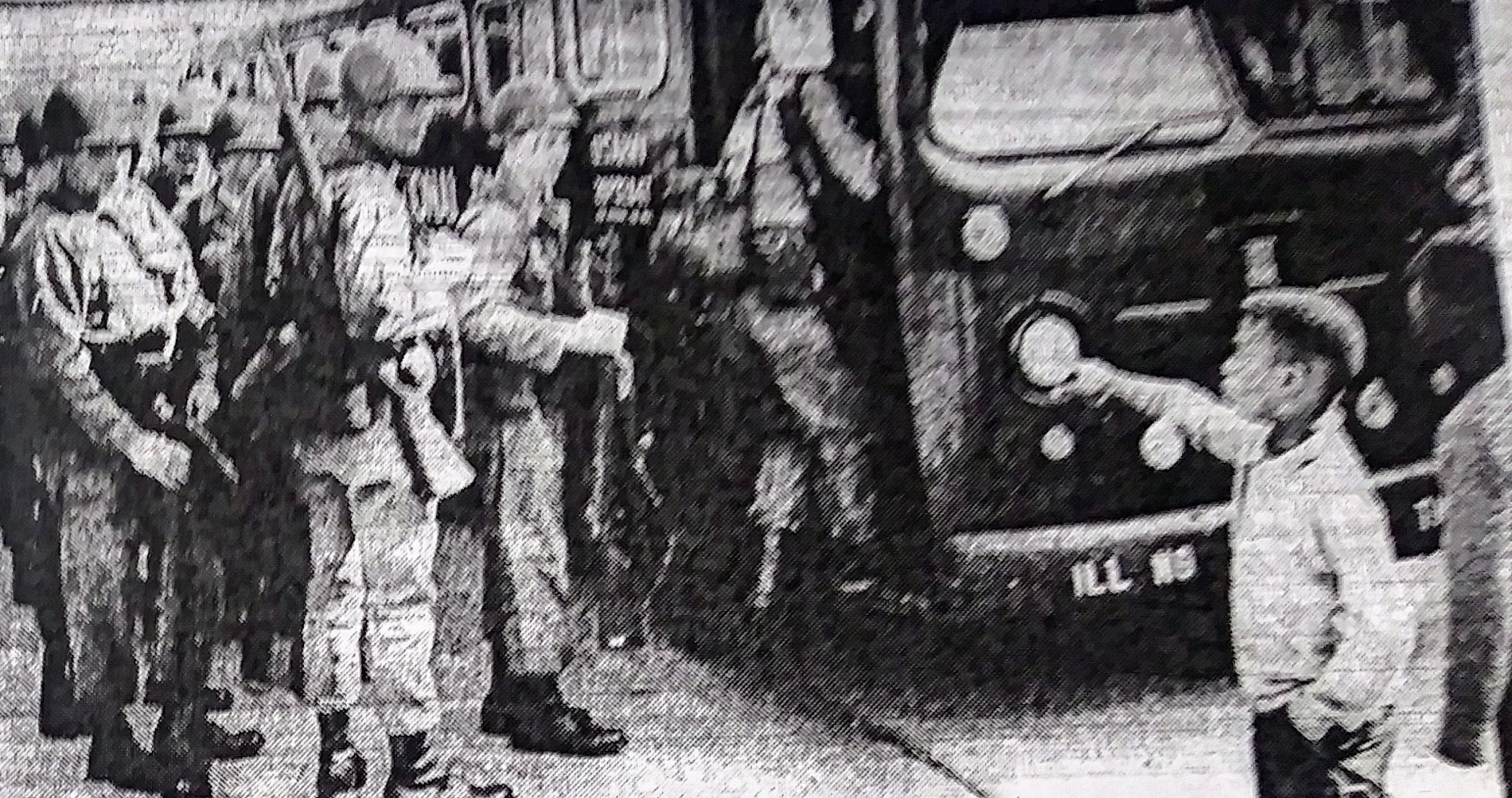 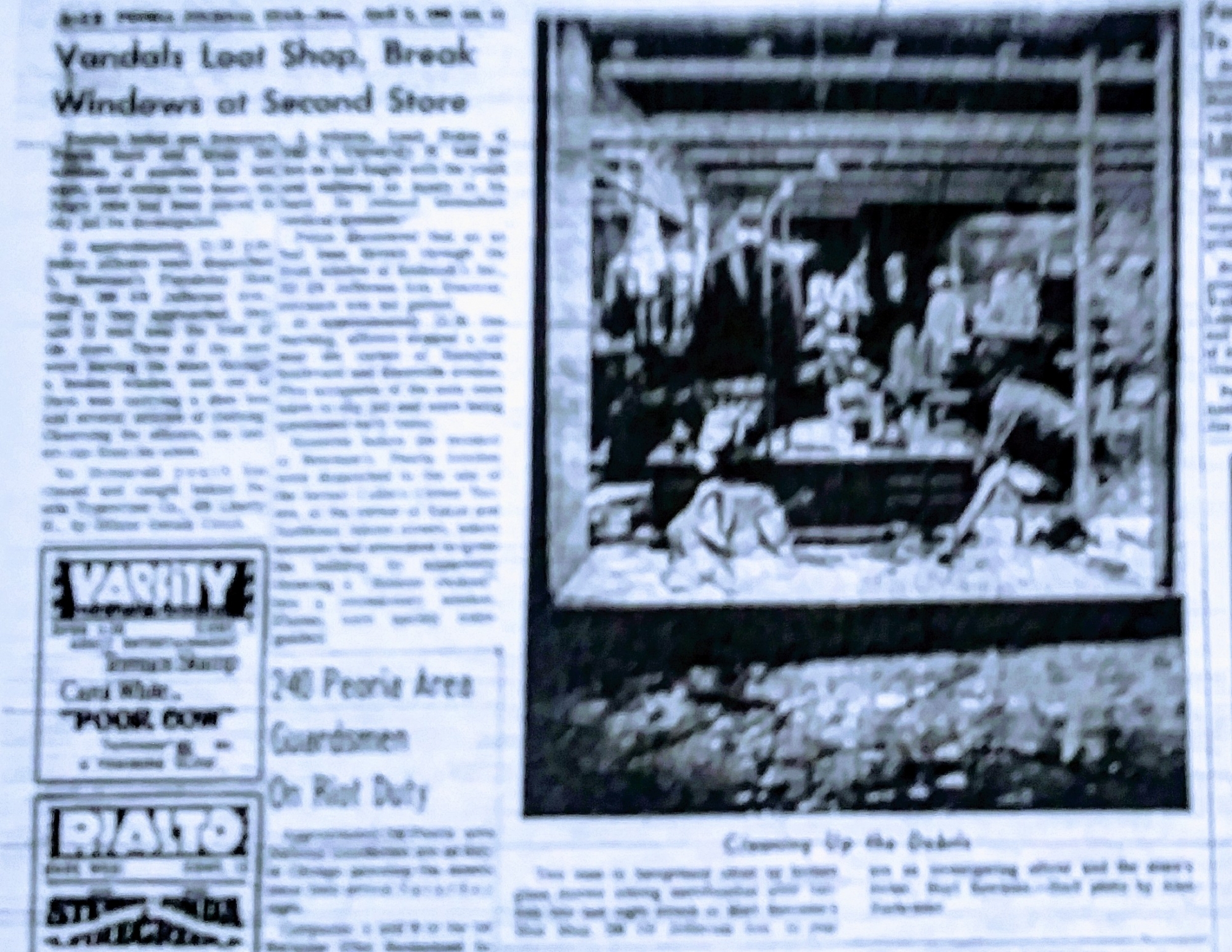 Rioting in Peoria in aftermath of King's murder. 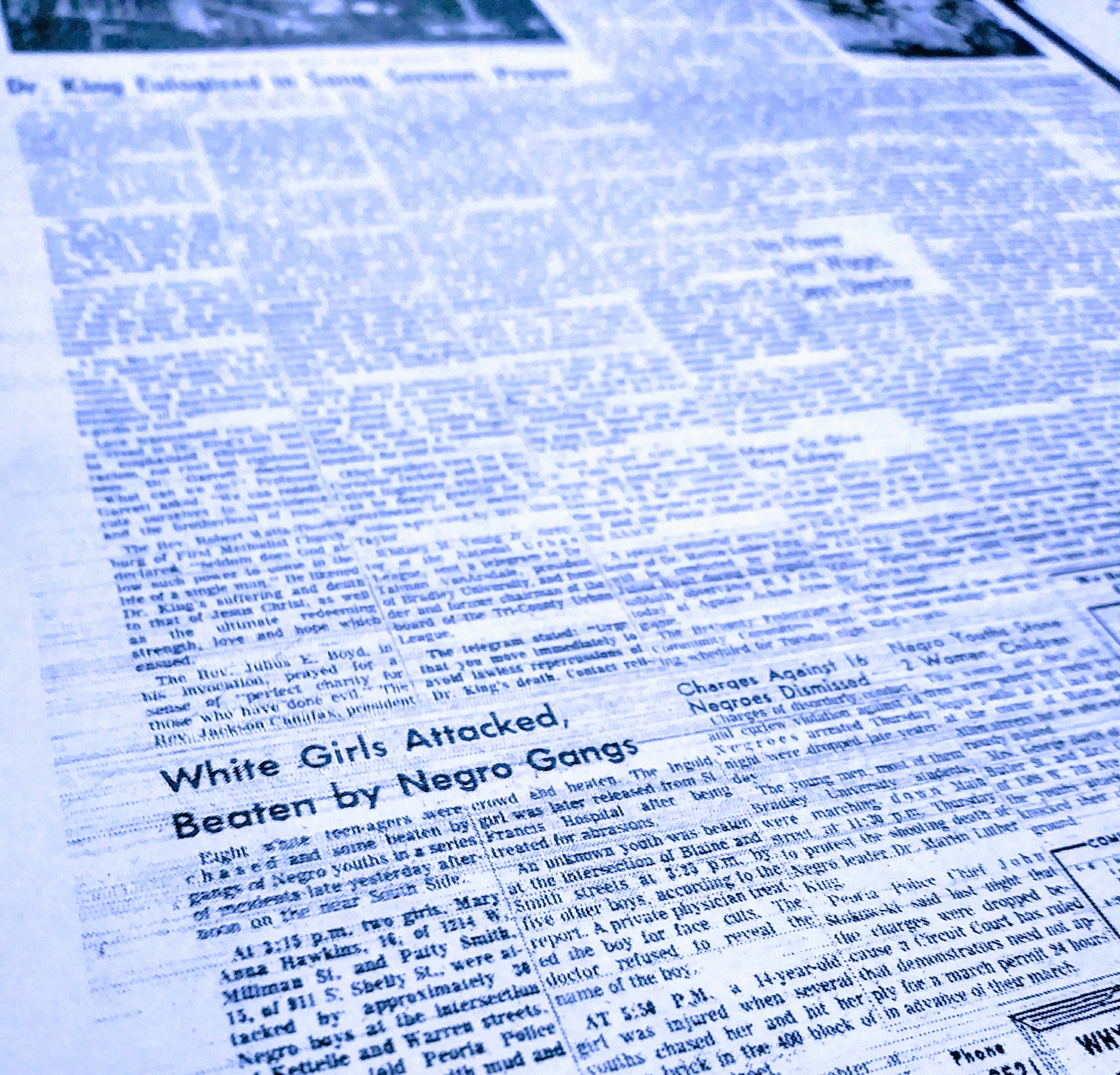 Article in wake of King's murder in PJ Star. 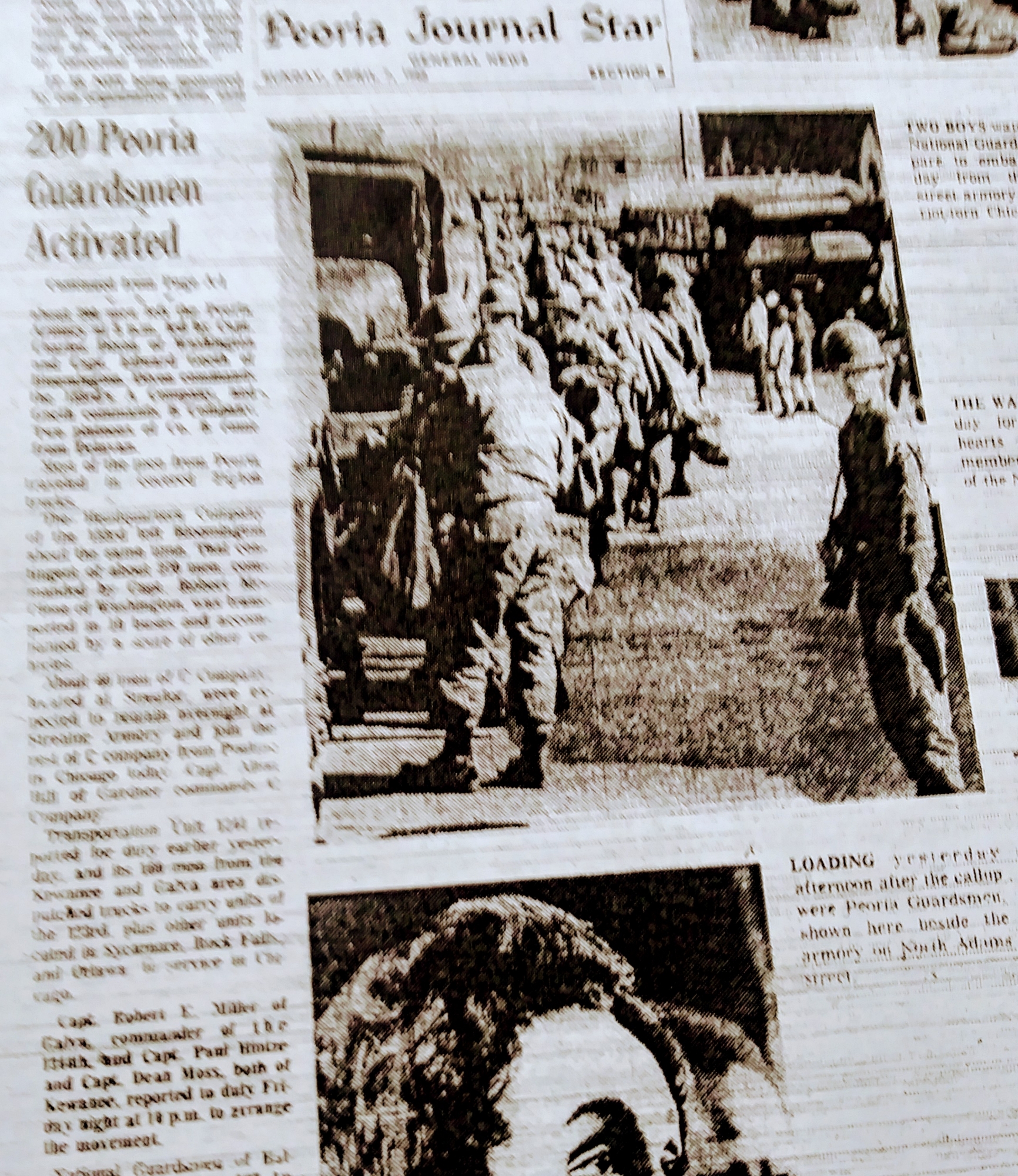 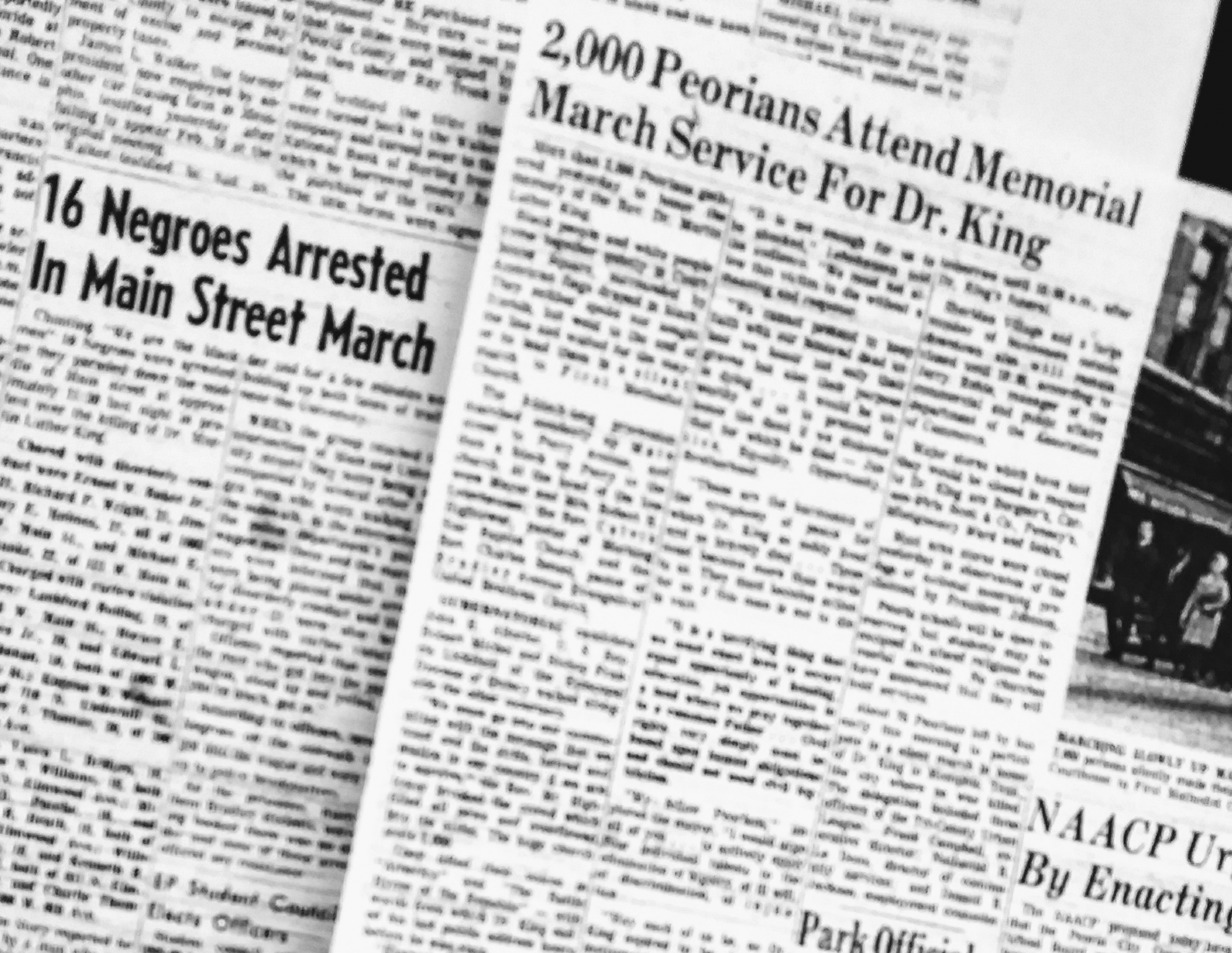