I sat down Friday afternoon with Rich P Evolon — who endorsed my candidacy for city council in the February primary — at Rumberger’s on Main Street in the River City.

Discussed the lowdown in P’town with the artist who demanded everyone’s attention 5 years ago when his “Welcome to Peoria” grab-by-the-throat howl of protest & defiance & pain screamed up from forgotten streets of real people.

The rap dropped in 2012 when he was based in Chicago.

“It’s really me. I can leave and still be me. I feel like that’s the best way I can put it. That’s because I really embody everything that Peoria entails when it comes from an African-American experience.”

The iconic “Welcome to Peoria” video opens with Evolon at the Harrison Homes sign. Did you grow up there?

“No. My sister. Well, I actually did live there for a little period of time. So (the video begins there) because I really wanna speak for the people that can’t speak. That don’t have the articulation abilities to speak — for their problems.

“And you know, I feel that’s what we’re here for. We’re here to help people along the way, we think that might not be able to speak for themselves.”

An honest brilliant voice of his generation, Evolon & I talked for a couple hours in the spacious center city tavern-casual restaurant & sports bar which he claims easily has the best wings in town. 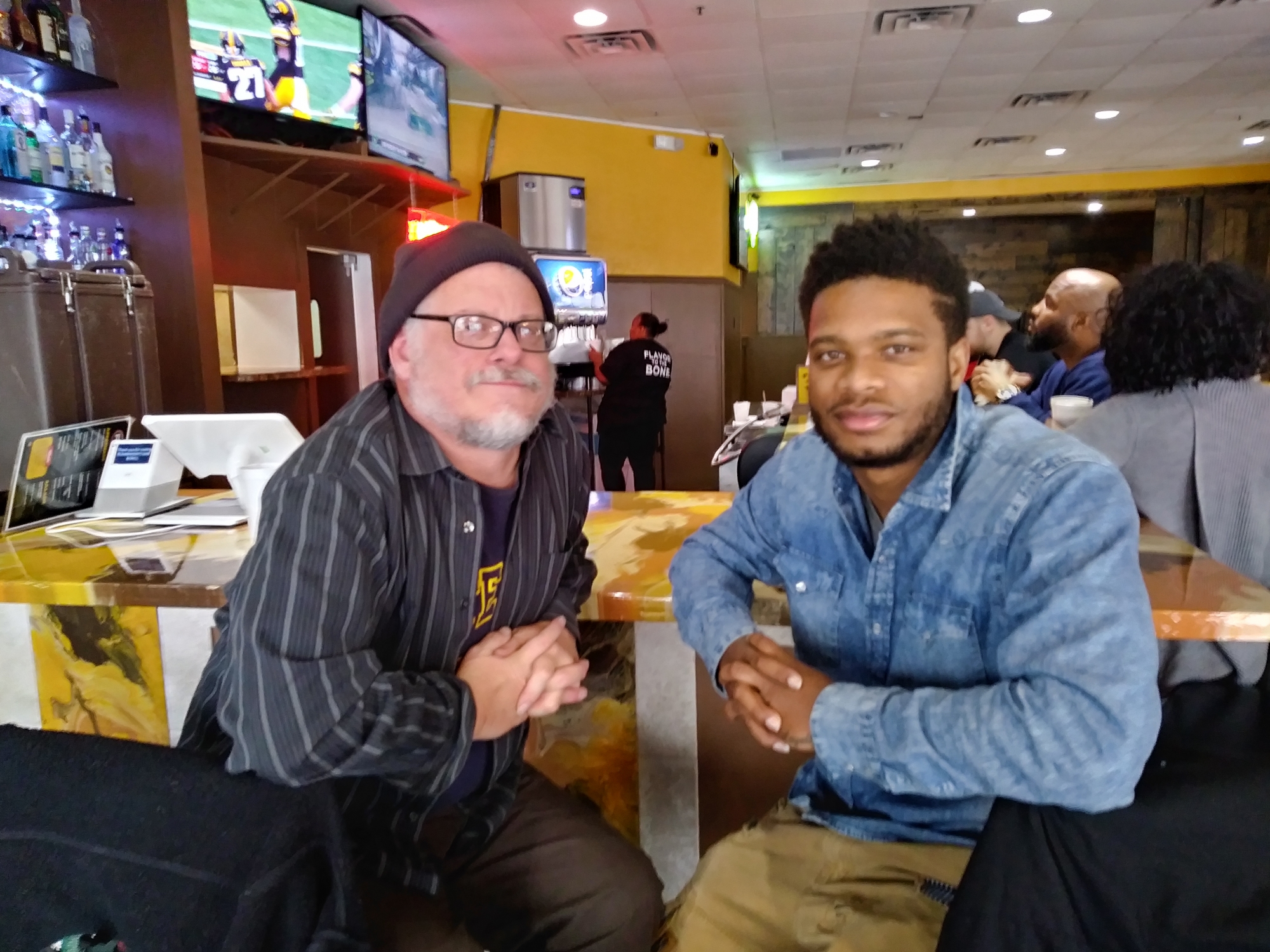 On my previous city council campaign post, I called out Peoria megabusiness Caterpillar, Inc. for its detestable decades-long practice of enthusiastically selling bulldozers & other equipment to the apartheid Israeli military.

Next, I need to address the Peoria Journal Star for its ongoing refusal to recognize and apologize for racist reactions in the wake of the murder of Mark Clark, leader of the Peoria chapter of the Black Panther Party, by Chicago authorities, who also murdered famed Illinois BPP leader Fred Hampton, both in a police death squad house raid in December 1969.

The following summer when something like open warfare between Peoria police and the African-American community broke out over wrongful evictions at the Taft Homes, the Journal Star again blamed the victims.

For years, I have written about the racist editorials and lack of atonement at 1 News Plaza.

So it was shocking to me about a year ago when PJS executive editor Dennis Anderson claimed in a piece he wrote and initially passed off in The Guardian as news that his paper had not enjoyed a good relationship with the city’s African-American community only because of disengagement and a focus on crime and “feel good” stories.

How about an active racist antagonism to the African-American community back in the day precisely at the moment when the people needed their newspaper the most?!

Many, many people are still alive TODAY, people whose lives were adversely affected by the racist power structure in Peoria, which absolutely included the city’s paper of record. No one gets a pass because a few years have gone by.

As we all know, almost every mistake, every terrible word and action can be forgiven.

Will the Peoria Journal Star ever do right by the African-American community?

Will the Peoria Journal Star ever revisit this time and place and own up to its racism?

Some newspapers in the American South have explicitly apologized for their rolls in segregation and Jim Crow. And the Los Angeles Times recently laid bare its terrible role in the WWII ethnic cleansing and concentration camp mass emprisonment of Japanese-Americans. Atonement, even decades after the fact, is not new journalistic territory.

Instititutional responsibility, journalistic integrity and a newspaper’s relationship with its city residents demand that the Peoria Journal Star finally do the right thing.

One more issue. The feds & FBI were deeply involved in the murder of Fred Hampton & Mark Clark, especially through a dirty tricks operation called COINTELPRO.

It went so far as to feed disinformation to newspapers across the country in order to defame and slander the Black Panthers, written as genuine news and opinion pieces by the papers themselves.

So it is a fair and rational point, therefore, to ask did COINTELPRO feed the Peoria Journal Star anti-BPP propaganda which they passed on as their own reporting and opinion?

From racist garbage back in the day to negligent commentary passed off as reporting now, our hometown Peoria Journal Star has a lot of explaining to do for the African-American community and the entire city.[]

I want to make sure people know where I stand on issues.

I respect the quality of their products & large number of employees in the region. But I have a HUGE issue with Caterpillar Inc.’s enduring practice of selling bulldozers and other heavy equipment to apartheid Israel, which weaponizes them in deployments against innocent Palestinian homes, property and lives.

The problem is so bad that Caterpillar remains one of the top international targets of the BDS on Israel movement. Boycott, Divest and Sanction on the state of Israel because of the relentless Zionist campaign to take Palestinian land and expel as many Palestinians as possible from their own lands & properties, often by Israeli terrorism and internationally recognized war crimes.

The recent and ongoing mass murders by apartheid military snipers on defenseless & unarmed Great Return March demonstrators in blockaded Gaza is only the latest example of these fascist Zionist murders of innocent Palestinian children, women, seniors, handicapped and men.

Caterpillar has been willing to gladly take Israeli money — regularly bolstered by US financial aid — and provide D9 & D10 bulldozers which are then weaponized by the apartheid state.

Archbishop Desmond Tutu himself, an authority on apartheid states if there ever was one, called out Caterpillar by name this summer:

A Message to The Episcopal Church 79th General Convention from Archbishop Emeritus Desmond Tutu, Bonnie Anderson and Patti Browning on Justice in the Holy Land

I fully support the BDS on CAT campaign. I have written about the topic, and organized public protests against CAT’s policy of willingly, for decades, selling its equipment for apartheid Israeli military use on civilians.

The worldwide human rights community has long demanded a stop to CAT sales to apartheid Israel.

I genuinely want CAT to thrive, but never at the expense of human lives. We demand CAT to stop, at the very least drastically curtail, its sales to apartheid Israel.

Is the CAT blood money from apartheid Israel really worth it?

Once they understand the reality of the situation, I think the majority of working people here in Peoria & beyond will answer a clear No!

And please, let’s all remember that CAT HAS NEVER been a partner or friend of regular working people here in central Illinois.

CAT fought labor wars AGAINST its unionized labor force relentlessly during bitter conflicts in the 1980’s & ’90’s when it decided to once & for all neuter the local UAW union and hold an extremely hard line on pay and benefits in no way commenserate with the company’s skyrocketing revenues.

CAT has shown it cares little in regards to its workers in Peoria over the decades. That’s perfectly in line with caring nothing about Palestinian workers in their occupied homeland who have grievously suffered at the hand of apartheid Israel using CAT equipment for its crimes against humanity.

I’m not okay with that.

I was on the ground in occupied Palestine in April & May this year.

My four main articles about Palestine are the first four here:

My main Palestinian video is the first one here:

When I returned home, I wrote this Op-Ed piece for the Peoria Journal Star:

Then I organized a BDS on Caterpillar rally featuring speeches by the parents of the late Rachel Corrie, which was reported on local news:

My BDS interview with Mint Press:

And So It Begins !

I submitted my candidate’s paperwork & nominating signatures this morning for an at-large seat on Peoria City Council !!

A number of potential candidates also were on hand at the 8am filing start, so a simple lottery will be held soon to determine the top ballot positions for the February 26 primary.

Fellow progressive candidate Peter Kobak to the right is shown filing next to me.

My primary focus is advocating for the working-class neighborhoods of the North End, South Side, East Bluff, central city, and more.

I intend to be a voice for the city’s low-income residents and their neighborhoods so long neglected by Peoria’s establishment.

I am dedicated to democratic-socialist action to bring about real results for the people of Peoria who feel they have been left behind and forgotten through no fault of their own.